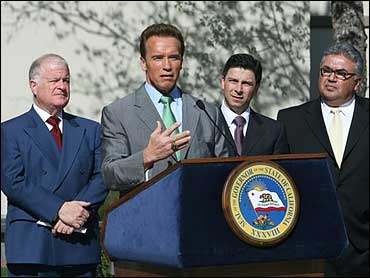 This column was written by John J. Pitney Jr..

Last week, Governor Schwarzenegger signed a bill that will shift California's presidential primary from June to February. If a presidential campaign is an ecosystem, then California is a big new predator that has entered the scene. It will cause many changes, but not all of them are easy to foresee.

Schwarzenegger suggested that the move will increase California's political influence. Instead of merely raising money in the state, he said, candidates must now "focus on earning the support of California voters." Republican candidates think that Schwarzenegger's blessing would help, so they are already courting him. Democratic candidates are treating Los Angeles Mayor Antonio Villaraigosa the same way. The two might not actually be willing or able to deliver any votes. But the courtship is providing them with something they both crave: the homage of powerful men.

Will California make presidential contenders change their policies? The Iowa caucuses practically require a pledge of allegiance to ethanol. Right now, California lacks any such unifying, state-specific issue. In the months ahead, the governor and the mayor could think of one, such as federal protection against earthquakes or drunken celebrities.

If the benefits to average voters remain questionable, it is likely that California broadcasters and political consultants will come out way ahead. Last year, Phil Angelides spent about $28 million to win the state's Democratic gubernatorial primary. That's more than John Kerry's presidential campaign raised in all of 2003. Multiply that amount (or some large fraction) by the number of major candidates, and you get a state awash in political money.

By the primary, however, there will be fewer serious candidates than there are today. Precisely because California and other big states are moving up their dates, candidates must raise tens of millions of dollars this year just to be credible. Not many will meet that threshold. Those who fall short will spiral into failure: the less they raise, the less credible they become, which makes them even less attractive to contributors. In this way, California will be even more brutal to candidates than to starlets.

Who will still be standing after California decides? Despite the state's liberal reputation, the advantages do not all lie on the left. Independents can vote in the Democratic primary, and they might tug the result a bit to the center. The GOP primary is open only to registered Republicans, who lean rightward. In the 2002 gubernatorial race, they picked little-known conservative Bill Simon over Richard Riordan, the moderate-to-liberal former mayor of Los Angeles. In contested primaries for statewide office last year, they also picked the more conservative candidates.

Of course, as all NRO readers know, conservatives are arguing over which presidential contender they should support. The winner of that argument might have an edge in California.

One complication results from a little-noticed change in party rules. The GOP primary used to be statewide winner-take-all. In the 1964 contest, Barry Goldwater won a squeaker victory over Nelson Rockefeller, but it was enough to give him all the state's convention delegates and virtually clinch the nomination. Now it is winner-take-all by congressional district. Therefore a candidate could place second or third in the statewide tally and still take quite a few delegates by coming out ahead in certain locations.

According to press reports, Mitt Romney is planning to conserve his resources by focusing on California districts where he has the best chance of winning at minimal cost. This approach will work if the nomination contest drags on to become a tight struggle for delegates. But things have not played out that way since the Ford-Reagan duel of 1976. In both parties, the pattern is that the nomination goes to the one who establishes a sense of inevitability by winning state primaries. Even when rivals gain respectable delegate shares, it does them no good when their supporters give up and their money evaporates.

One thing is sure: California will chew up some would-be presidents. That's an appropriate role for a state whose flag features a grizzly bear.