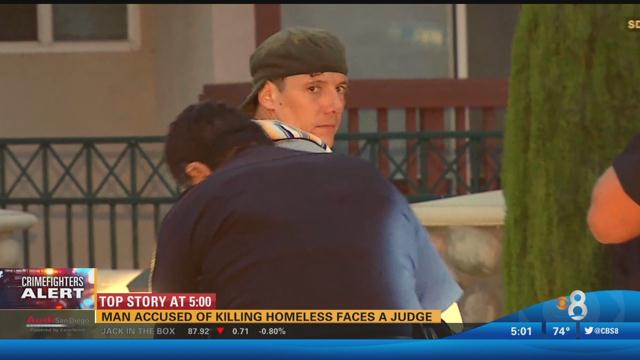 Jon David Guerrero, 39, was charged with three counts of murder and two counts of premeditated attempted murder, along with a special circumstance allegation of multiple murder, Deputy District Attorney Makenzie Harvey said. An allegation that he used a weapon, which she didn't specify, was attached to the charges.

The prosecutor said that because of the special circumstance allegation, the defendant could face the death penalty or life in prison without parole if convicted. Prosecutors have not yet decided if they will seek the death penalty.

"That's a decision that will be made at a later time," Harvey said.

Guerrero did not enter a plea during his first court appearance before San Diego Superior Court Judge Frederick Maguire. His public defender, Dan Tandon, asked was granted a delay in the arraignment until Aug. 2.

Guerrero was arrested Friday after being spotted by a patrol officer in Park West, San Diego, not long after the latest assault.

San Diego police said the victims were brutalized -- two of them set on fire -- as they slept on roadsides, in open areas and under freeway bridges. According to Harvey, the two injured men are expected to survive despite serious wounds.

The spree of assaults across the city left San Diegans -- particularly those who live on the streets -- shaken and on edge since the Fourth of July weekend.

The first attack in the series occurred July 3. About 8 a.m. that day, the burning body of Angelo De Nardo, 53, was found underneath an interstate offramp in Bay Park, San Diego. Witnesses to the disturbing scene described seeing a man running across the freeway, carrying a gas can.

The following day, Shawn Mitchell Longley, 41, was found dead at a park in Ocean Beach, San Diego, and 61-year-old transient Manuel Mason was severely wounded near Valley View Casino Center in the Midway district, according to police.

On the morning of July 6, Dionicio Derek Vahidy, 23, was gravely wounded in downtown San Diego by an assailant who fled after leaving a towel burning on top of him. Vahidy died in a hospital four days later.

Authorities have not released the victims' causes of death or disclosed a suspected motive for the violence. There are no indications that the suspect knew the victims, according to police.

The officers pulled over and found a 55-year-old homeless man suffering from "significant trauma" to his upper body, the captain said.

Guerrero, a Coronado native who most recently lived in downtown San Diego, was arrested about two miles from the site of the assault.

Nisleit said detectives discovered physical evidence at the scene of the Friday attack and at the suspect's residence that "definitively and uniquely links together the recent murders and brutal attacks against our homeless community."

Tandon told reporters outside the courtroom that Guerrero's story starts well before the moment the attacks started.

"San Diego deserves to hear the truth and the whole story in this case," Tandon said. "We're just beginning the process of gathering the information so the whole story, including Jon's, can be known."

Another man was arrested July 7 in connection with the attacks but was cleared when additional evidence was discovered.