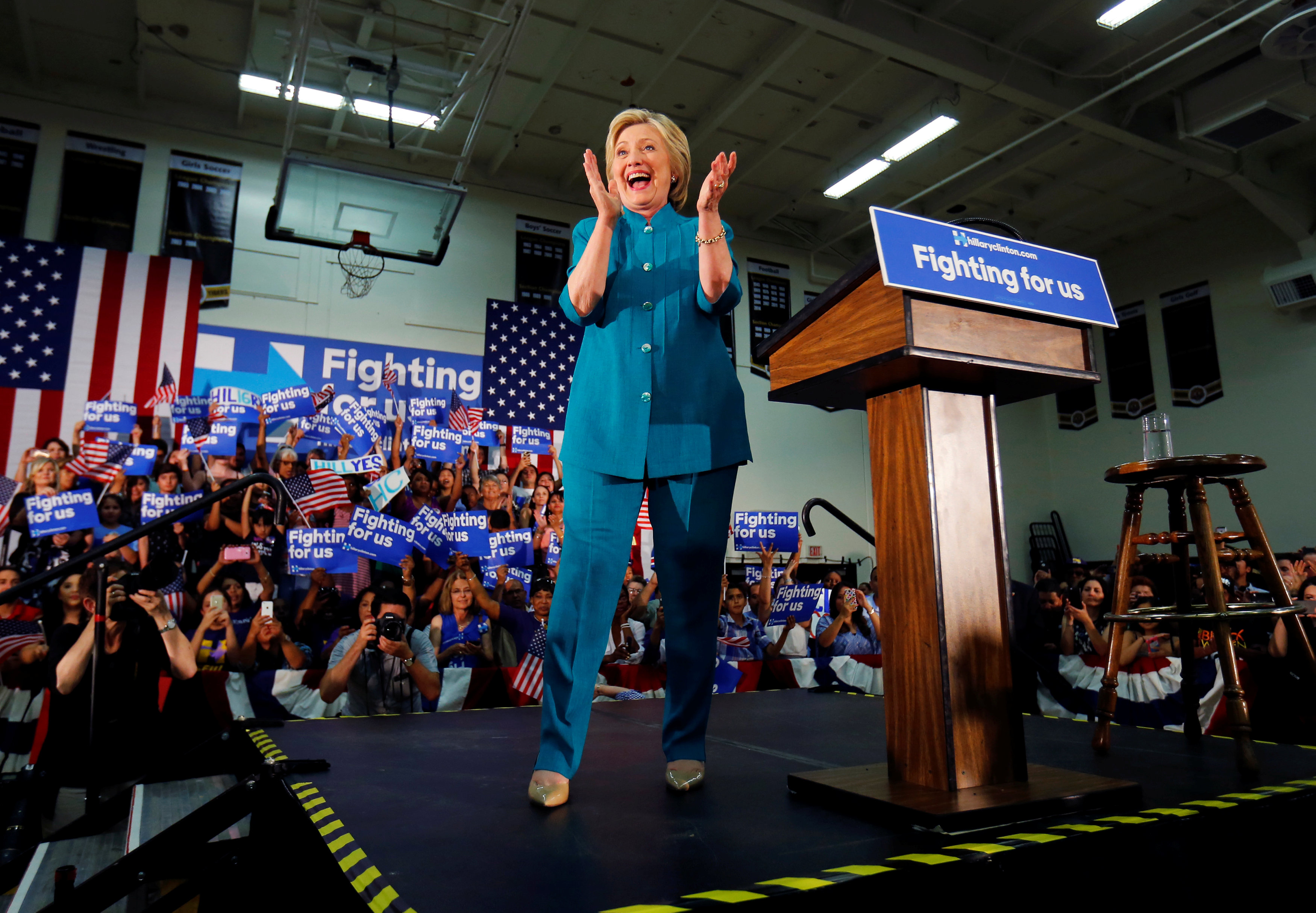 SACRAMENTO Hillary Clinton came here to California's capital city two days before primary day and urged 1,500 supporters in a community college gymnasium to mail in their ballots or make sure to get to the polls.

"I want to finish strong here in California," she said. "It means a lot to me."

The Clintons have gone all-in on California.

With polls tight and a formal victory in delegates within reach, both Hillary and Bill Clinton have spent the final five days barnstorming the Golden State from Redding in the north to the Mexican border in the south. Sanders, meanwhile, has camped out in the state for almost the last month, approaching the massive state with an almost Iowa-like focus.

With the additional time and events in the state, Clinton is hoping to ensure a win on Tuesday night as a final step toward securing the nomination. Though a Sanders victory here wouldn't change the fact that Clinton is expected to mathematically clinch the nomination Tuesday night, it has symbolic value for the Vermont senator and would add fuel to the fire for his supporters who believe Sanders has been treated unfairly and should continue his campaign through the Democratic convention in July.

And things are certainly close: A CBS News Battleground Tracker poll released Sunday found Clinton leading Sanders by just two points, 49 percent to 47 percent. Other polling in the race, including from the California-based Field Poll, have found similarly close margins in the final lead-up to primary day.

Months ago, it looked like California would hardly be a contest: polls earlier this year mostly gave Clinton a double-digit lead over Sanders here. But the Sanders campaign made it clear the state would be his last stand, and that a victory here would send a message about his continued presence in the race--something Clinton's team is hoping to avoid.

At a rally in Fairfield, Calif., on Friday, Sanders pointed out the Clinton campaign's late added focus on California in these final days, saying she is getting "very, very nervous."

"She and Bill were in New Jersey and they had some events there and they had to cancel events and get on a plane and go all the way across the country," he said. "And the reason they came early to California is they know something that you know and I know--that if there is large voter turnout on Tuesday, we are going to win California, and we are going to win it big."

As Sanders noted, Clinton had indeed canceled a day's worth of events in New Jersey in the week before primary day, coming to California last Thursday and keeping up a packed schedule of events since then. She'll continue that on Monday, with stops across southern California and a primary get-out-the-vote concert in Los Angeles.

Bill Clinton, too, has kept a busier-than-usual schedule and spent those same five days campaigning across the state. He made it as far north as Redding, a three hours' drive from San Francisco and an infrequent stop on the Democratic campaign trail; on Monday, he has five get-out-the-vote rallies scheduled around the San Francisco Bay Area.

And pulling on the Clintons' long-standing ties in the state, the campaign has had dozens of high-profile surrogates hitting the trail in the final stretch to blanket the state. Those include big-name California politicians like Sen. Dianne Feinstein, former Los Angeles Mayor Antonio Villaraigosa and Lt. Gov. Gavin Newsom; local activists and elected officials; and Hollywood names like Jamie Lee Curtis, Michelle Trachtenberg and Star Jones.

"They've got a surrogate bench here that dwarfs anything the Sanders campaign has," said California Democratic strategist Brian Brokaw. "Up and down the state, you've got mayors and members of Congress and community activists--and there is a value to that."

The final days of intense campaigning come as the San Francisco Chronicle chastised Clinton for putting too little time and energy into the state's primary, opting to endorse no one in the Democratic primary.

The Vermont senator has camped out in the state for weeks, making it his sole focus in the home stretch of primary season. While both Clintons have stopped in other June 7 states in recent weeks, the last time Sanders left California was for events in New Mexico on May 20 and 21. Otherwise, he has been campaigning daily in California, spending half of May here and all of June thus far.

The Sanders campaign released an astonishing number this weekend -- more than 250,000 people have attended one of his rallies in California as of Sunday. Many are in big population centers, like Los Angeles or Oakland; others, though, have been in places that almost never see a national candidate. One such example is Spreckels, Calif., a town of 700, where Sanders held a fracking press conference recently.

"A core motivation for his travel schedule and where he goes is, he's trying to shine the light on as many people as he can who've been left behind by the rigged economy...places like Stockton and Vallejo that have gone through some tough times, places where a lot of candidates don't always go," said Ben Tulchin, Sanders' California-based pollster.

In addition to regular campaign events, Sanders attended Game 7 of the NBA semi-finals in Oakland last week, where the Golden State Warriors earned themselves a place in the finals. (Since then, the senator has sported a bright-yellow Warriors hat at campaign events around the state.)

"He's almost running an Iowa-style campaign in the largest state in the country," Brokaw said. "So whether that actually translates into votes, that's--definitely a gamble, but I'm also not sure what other approach he really could have taken."

Democratic operatives in the state say the race is still likely Clinton's to lose, in part because her campaign has likely gotten a head start with the voters who have already mailed in their ballots. Two-thirds of Californians are expected to vote by mail.

Further complicating things for Sanders are California's strange rules for how nonpartisan or "no party preference" voters can cast a vote in the Democratic primary: more than 2.2 million of them are eligible to vote in the contest between Clinton and Sanders, but nonpartisan voters must specifically request a Democratic ballot.

Sanders, however, is hoping the influx of 1.5 million new people on the California voting rolls this year--including young people, who have trended toward Sanders throughout the primary season--will give him the kind of turnout surge he'd need to put him over the top.

"We will, I guess, see if this retail-style politicking can work in a state of 38 million people," Brokaw said.