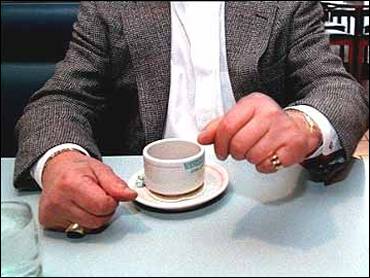 With apologies to petroleum, America's fuel is caffeine.

Coffee is the brew kick-starting a nation of bleary-eyed, foggy-headed sleepwalkers.

America might be the melting pot, but it sure is the coffee pot.

One could really make the argument that coffee is the "American lubricant." It lubricates social situations and the workplace, says Bob Thompson, a professor of popular culture at Syracuse University who teaches a whole course on Starbucks.

"As you're working during the day coffee become the equivalent of 'in-flight fueling station,'" says Thompson. "You grab a cup on your way to work, you've got your little commuting holder in your car, there's a pot at work ... I think it's really appropriate that oil and coffee look the same because in a lot of ways oil and coffee are doing the same job."

After oil, coffee is the second most valuable commodity in the world. More than 50 percent of Americans drink coffee everyday — three to fourcups each, more than 330 million cups a day and counting.

But for all the new flavors and varieties, it's not the taste that drives coffee's popularity.

"I can remember the first cup of coffee I did drink," says coffee drinker Nora Harvey. "I got a big buzz. I was like, 'This stuff is legal?'"

Bennet Weinberg has written two books on coffee. His latest is called "The Caffeine Advantage." Weinberg says caffeine is the world's most popular drug.

"If coffee didn't contain any caffeine, would it be the popular beverage … the dominant beverage that it is in our culture?'" asks Weinberg. "Well there's no question it would not be. You know, it can't be a coincidence that all the most popular drinks on earth, which taste quite different from each other, all contain caffeine."

Caffeine is one of the fastest acting drugs known to man. When we drink it, almost every cell in the body, including the brain, absorbs it within minutes. There, caffeine works it's magic by blocking something called adenosine, a chemical the body releases to tell the brain it's tired. Caffeine intercepts the adenosine, turning the "I'm tired," message into "I'm wide awake." The result is an invigorating buzz coffee drinkers crave.

"It's the characteristic and hallmark drug of our time," says Weinberg.

And, it's not just coffee. When you add in tea and caffeinated soft-drinks, more than 80 percent of Americans get their morning fix.

Coffee's virtues have been sung to us for generations. Even so, it has never had quite as much cache as now. Remember, the nickel cup of coffee savored by the everyman at dreary diner counters? It's gone forever — disappearing in the milky mist of a double shot, skinny, half-caf, venti, caramel moccachino. Bennet Weinberg is one of the loudest voices in a growing chorus singing the benefits of that coffee buzz.

"Instead of going to a bar, getting drunk and not even remembering what you did that night, you can go to a coffee house, have your mind sharpened, your mood elevated, your verbal fluency increased, even your friendliness factor go up because of caffeine and do this without any real harm to yourself," says Weinberg.

But the notion that caffeine is harmless is up for a long-brewing debate.

"We really want something that'll help us work harder, sharpen our minds, increase our sense of well-being, improve our performance," says Weinberg. "Caffeine is just that substance that can unlock our potential."

This new school of caffeine advocates isn't shooting from the hip. University of Arizona researches have found caffeine improves memory in seniors. Others at UCLA take it a step further. Caffeine improves and repairs memory for elderly women. Other studies say caffeine is therapeutic for everything from depression, to addiction, to gallstones and even skin cancer.

Peter Martin runs the Institute for Coffee Studies at Vanderbilt University. Coffee countries, like Brazil and Colombia, and a U.S. coffee trade group fund it.

"Over the last 100 years, the emphasis of the scientists have been tinged by this puritan ethic," says Martin. "And that is coffee must be bad for you. And I think that has guided scientific research."

"I take 25 grams of this coffee in a beaker. And then I'll drink it one minute," explains Dr. Depaulis. "And we start taking blood samples every 10 minutes."

No, he's not crazy. It's decaf. The idea is to study the other compounds in coffee and determine how they might affect the body.

"What we're finding is in fact coffee contains a lot of other compounds … A lot of interesting compounds that may actually modify the effects of caffeine," says Peter Martin. "And what we think is that coffee … the coffee bean holds the secret to a number of very important illnesses that affect mankind."

It would be nice, wouldn't it? Drinking all the coffee you want without a worry. That would be nice to guzzle a miracle drug, if not for a free lunch, certainly a no-risk coffee break, according to the new school. But as we all know, where there's a new school, there's an old school.
And that school has a lab and doctors, too. However, they have a very different point of view on caffeine.

"I think on average, the consumption of caffeine probably does create a public health risk," says Dr. Jim Lane, a researcher at the Duke University Medical School.

"We've been studying this for 15 years," says Dr. Lane. "And in every single study that I've ever done, both in the laboratory and studies of people's blood pressures when they live their normal lives, caffeine always raises blood pressure."

His research shows the amount of caffeine many Americans consume each day can raise blood pressure enough to increase risk of heart attack or stroke 20 to 30 percent.

"Half of the adult population in this country are regular coffee drinkers … drinking an average of three to four cups of coffee a day," says Dr. Lane. "That might be 100 million people who are putting themselves at great risk of a heart attack, a stroke or early death as a result of the coffee drinking they do."

It's a threat, he says, that has grown with the size of the cups that serve them. Last generation's nickel cup of coffee has been super-sized.

"In the '50s, maybe a cup of coffee would have been 5 ounces of coffee. But now we see these 32-ounce cups, and people driving in the cars with something that's almost half a pot of coffee in their hand," says Dr. Lane. "As time has gone by, the servings have gotten bigger and bigger, so people, almost without thinking, are consuming much more caffeine than they used to."

It's all in the name of fueling up and to survive the rigors of our stressful lives. But, Dr. Lane suggests coffee isn't helping with the stress. It is magnifying it.

"This really could be a constant daily circle," says Dr. Lane. "They wake up in withdrawal until they have caffeine. They use caffeine to get themselves going through this stressful, fast-paced day. But the drug is actually increasing the wear and tear on their body that the stressful life causes. I think people would be healthier if they weren't drinking coffee regularly."

But that might be asking a bit much in a country where — after air and water — coffee ranks third in some people's notion of life's essentials.
Who knows? Perhaps some citizens of caffeine nation may hear the old school warnings and pause before tanking up.

But chances are, tomorrow morning, the vast number won't give it a second thought. They'll be unconsciously kick starting another day.
"You take caffeine out of the equation of American life today and tomorrow, this would be a very, very different world," says Thompson.