Sooner or later, it affects every audio recording, video recording and computer file. Contributor David Pogue looks at what happens when technological progress leaves your most precious memories and recordings behind.

Lydia Robertson is a filmmaker. But you've probably never seen her first movie, the one she made in high school.

"It's called 'The Chicken Lady,' a horror-comedy," she said. "It's the most ridiculous film ever made. It might be one of the worst films ever made! But we learned a lot, and that was the point."

Trouble is, she hasn't seen it, either.

"By 1986, when I was graduating from New York University film school, you couldn't get these machines to play it back on. So I had no way to play it. I've not seen it since it was made."

Her tapes are fine, but the machines that can play them don't exist anymore. In other words, her movie is a victim of data rot.

Data rot affects computers, too. Over the years, both the hardware and software programs become obsolete and are abandoned. Just ask biotech worker Bill LaVia, who can no longer open his slideshow presentations from ten years ago.

"The program is Aldus Persuasion, and it was slideshow presentation program. They basically went out of business, because PowerPoint took over that marketplace." PowerPoint can't open his Persuasion files.

"My data is unreadable," he said.

In fact, so many computer formats have come and gone, they could fill a museum. And they do: The Computer History Museum in Silicon Valley.

Dag Spicer, the museum's senior curator, said, "There's a Pez museum, a Barbie museum, a mustard museum - why wouldn't you preserve the computer, which is maybe the most influential piece of technology in the last 100 years?

Spicer showed us the world's first hard disk, invented in 1956 in San Jose. It weighs 1,000 pounds and holds five megabytes. Compared to a modern iPod which holds 10,000 songs, the 1956 hard drive would hold one song.

"And it would be a real pain to carry around," Pogue said of the half-ton accessory.

At a computer museum, you can't miss the point that, sooner or later, every recording format eventually gets left in the dust.

In fact, these days, new formats are coming faster and faster, and each one expires faster than what came before it.

"There's a consensus that as the ability to store more and more data [increases], the data itself has become less and less reliable," said Don Mennerich, an archivist at the New York Public Library.

In 1996 the library tried to rescue those 30-year-old recordings by transferring them to fresh, brand-new tapes. But Mannerich says now, less than 12 years later, "those tapes are already significantly degraded.

"The tape actually, physically will shed against the head of the tape player, until it's unplayable."

"The original tapes are holding up better than the 1996 transfer?" Pogue asked.

But not everyone is unhappy about data rot. An entire industry has sprouted up to help you recover your old recordings and data. You can buy do-it-yourself gadgets that convert your old audiocassettes, records and slides into digital formats.

For audio and video recordings, there are professional converting companies like VidiPax in New York City.

"We restore, and then we make something else out of it,' said Sam Verga, the director of marketing.

(CBS)
He showed Pogue an early recording of Walter Cronkite, played back on their 2-inch tape machine, something that couldn't be seen at CBS' headquarters on West 57th Street.

"CBS News doesn't have the machine they need to play their own tapes?" Pogue asked.

Half the challenge is just keeping all those antique machines running. Verga showed Pogue a wire recorder dating back to the 1950s.

"It looks like monofilament fishing line," Verga said, "and that's actually embedded with an audio signal."

The sound that come forth was John F. Kennedy's inauguration speech.

"So are you telling me you actually get customers now and then sending you spools of wire and saying, 'Turn this into a CD?'" Pogue asked.

Of course, if you're worried about your old recordings, look at the bright side: some people have much bigger collections to worry about … like the Library of Congress.

Laura Campbell is the chief information officer of the Library of Congress, which houses the world's largest collection of movies and recorded sound, as well as 56 million manuscripts, six million maps, and a million and a half rare books.

Since the early '90s, Campbell has overseen a multimillion-dollar effort to digitize the Library's most precious holdings, both to preserve them and to make them available to the public on the Internet.

"Well, really, what we're trying to do is to save our collective memory, to be able to pass on human record of our time," she said.

And so, every day, in back rooms in Washington, D.C., library employees are painstakingly digitizing the library's 16 million photos, prints, and posters … one scan at a time.

Their boss is Helena Zinkham, acting chief of prints and photographs. 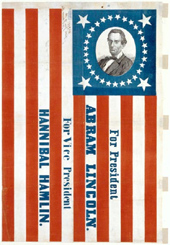 (Library of Congress)
She displayed one of the posters from their collection (left). "This is one of our favorite items, where Abraham Lincoln is running for President in 1860."

"Actually, this is about a guy named 'Abram Lincoln,'" Pogue notes.

"True. They ran out of a little bit of space on that line in the flag, and so they left out the H."

So, working to create digital copies of artifacts that are 100, even 200 years old, how do they choose an electronic format that can be guaranteed to still be viewable 200 years from now?

"It's an open standard, a very plain type of digital file called TIFF," Zinkham said. "And we have actually had to migrate these files already."

There's that word again: Migration. The more you talk to data-rot experts, the more often you hear it. And the more you realize that converting your old recordings to digital formats is only the beginning. Preserving those files is a job that will last the rest of your life, and beyond.

"A hard drive lasts about five years," Spicer said. "The low range of CDs' and DVDs' longevity is five years. So the basic lesson is: Look after your own data and make sure that you take steps to keep it moving onto new formats about once every ten years."

In the digital age, migration is the only chance we have of preserving our recordings and our files. And again, preserving recordings is a lifelong job. But you can do it. Just follow these three easy steps.

1. You convert whatever you can afford to digital.

2. Store your tapes and films in a cool, dry place.

3. And above all, remain vigilant. As you now know, every ten years or so, you're going to have to transfer all your important memories to whatever format is current at the time, because there never has been, and there never will be, a recording format that lasts forever.

"Is there any permanent, forever storage media today?"

"Only the brain, the human brain," Verga said. "And that lasts for about 75 years."