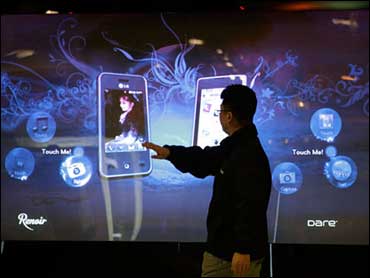 Every year at CES the buzzwords slowly rise to the surface.

This year, in no particular order, it's all about touchscreens, 3D, thinner/compact design, streaming media, mind control, and greener technologies, among many others.

Aside from a few exceptions, this show is shaping up as a CES that's more evolutionary than revolutionary, but still packed with plenty of eye candy.

The new Panasonic VIERA flat panels are one-inch thick, and Sony is displaying a prototype OLED (organic light-emitting diode) monitor that's 27" and even thinner. The picture quality in both is astounding from up close, but the cost will be prohibitively expensive for most people for years to come. OLED is definitely the latest acronym to add to your vocabulary -- thanks to its eye-popping quality and lower-power demands we'll see plenty more in the years to come.

Mattel has entered the "mind control" market (think mind-eye coordination instead of hand-eye) with the MindFlex, which apparently taps into brainwave activity to power a game that floats a small ball through a customizable obstacle course. It took me a few tries get my head around the concept, and Mattel isn't disclosing exactly how it works. But I will say that firsthand it was like the ultimate thinking cap. The more I concentrated, the faster the fan would spin that controls the floating ball. Next stop: levitation. It will retail for $80.

There are any number of new (and smaller) HD cams like the Canon VIXIA HF S10, which is barely larger than, say, four cigarette packs stacked two-by-two. It has true HD quality, offers a touchscreen LCD viewfinder, and will take 8-megapixel still photos. Storage is 32 GB, which on the highest-quality setting means a few hours of video. Other visual technologies that caught our eye include the chocolate bar-sized WowWee Cinemin Swivel that plugs into a multimedia player to display video or photos on a larger surface. Like a mini-movie projector in your pocket that could be shown on a wall or curtain. It will go for $299 in the spring.

The new Sony Vaio P series Lifestyle PC is part netbook, part laptop. At just 1.4 pounds and about as thin as a cell phone it's a small computer notebook (powered by Vista) that Sony hopes will compete with both the MacBook Air and the rising popularity of netbooks. It won't be as cheap as its netbook cousins with a price tag at $900. The system interface reminds me of the one used in the Sony PSP, and a trackball mouse guides your cursor. For the style conscious, it comes in a variety of colors.

It's back to the future with 3D -- gone is the blurry picture thanks to digital stereoscopic image capture that's being incorporated into everything from webcams to video games to live TV. It's tough to show the cool factor with 3D on TV without those snazzy glasses but in person it's quite neat. I got my hands (eyes) on the one from Minoru, which uses two cameras to feed the stereoscopic image and convert it to one camera feed. It works with Skype or AIM, and you can even shoot video with it and then upload to YouTube. Just remember those glasses! Lots of potential for future 3D applications and in keeping it affordable. The Minoru retails for $90.

That's just a quick sample of the gala of gadgetry here at CES -- plenty more to come over the next few days. It can be a little like drinking from a fire hose here so we'll do our best to bring it all to you! In the meantime, stay connected.