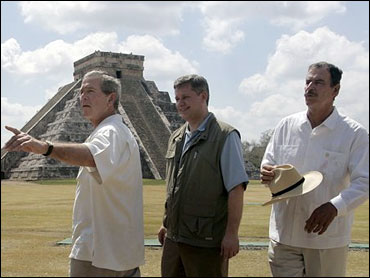 Embarking on a neighborly sightseeing jaunt Thursday with the leaders of Mexico and Canada, President Bush said the three were working to improve vital relationships that can improve the lives of all their people.

Mexican President Vicente Fox treated Mr. Bush and Canadian Prime Minister Stephen Harper to an hour-long tour of the ancient Mayan ruins at Chichen Itza before they began two days of talks amid spring breakers in this Caribbean resort city.

"This is a good start to a very important series of discussions," Mr. Bush said, standing along side the other two with the massive pyramid called "El Castillo" in the background. "We've got vital relations that matter to the future of our people."

The three leaders gazed up at the famed archaeological site while Fox, wearing a white shirt and brimmed hat, and a guide motioned at different points. They listened to a traditional band play music for colorfully dressed dancers, strolled around a large plaza and climbed about half a dozen steps of the pyramid at the center of the site. They paused briefly so photographers could get pictures before coming back down.

After their tour, each leader spoke in his own language. Harper said the ruins were "a symbol here of our determination to build a new future for all inhabitants of North America."

Mr. Bush doesn't typically get in much sightseeing on his foreign visits, but the tour began two days of talks in this beer and bikini mecca designed to showcase North American unity.

Mr. Bush, who was wearing an untucked cream-colored Hawaiian shirt, and Harper, wearing an open-necked shirt and a safari vest, were all smiles for their first meeting since Harper, a Conservative, took office two months as Canada's new leader.

Topping Harper's agenda is a long stalemate over U.S. tariffs on Canadian softwood lumber imports. "I'm always optimistic" about resolving the problem, Mr. Bush said. In a pre-trip interview, Mr. Bush said he thought the two sides were "pretty close to a deal a couple of years ago." He said it would not be resolved by public negotiations. "It's going to require some very quiet consultations."

Illegal immigration and terrorism fears also are on the agenda.

After touring the Mayan ruins, Mr. Bush was sitting down one after the other with Fox and Harper, and then was attending a lavish leaders dinner put on by his Mexican hosts. The president's wife, Laura, did not join him for this trip.

The official focus of the trilateral summit is a three-way pact designed to make borders more secure without hampering business and traffic. Signed a year ago near the Bush ranch in Texas, the Security and Prosperity Partnership aims to better protect North America from outside attack and ensure its global competitiveness with China and other trade powerhouses.

But Fox and Harper come to Cancun with much more on their minds. Both have powerful constituencies at home pressing for progress on problems related to the enormous flow of goods and people between their countries and the United States.

Mexico's top priority with its northern neighbor is a migration accord that would address the status of the estimated 6 million illegal immigrants from Mexico now living in the United States. For Canada, issue No. 1 as it looks south is the messy trade dispute over softwood lumber.

Mr. Bush extended an olive branch in both directions before the trip. He told foreign reporters "don't underestimate" his ability to wring from Congress a guest-worker program that would address some of Mexico's concerns, and said he would "like to get the issue solved" on Canadian lumber tariffs.

Sharing Cancun with the media, official entourages from three nations and hundreds of anticipated demonstrators was a much-smaller-than-usual contingent of spring-breakers since the resort hasn't completely recovered from the beating delivered five months ago by Hurricane Wilma. Police readied the town by erecting fences to keep protesters and others far from the leaders.

Mr. Bush departed Washington for his meetings with Fox as an emotional election-year dustup over immigration — what he called the "topic du jour" — continued to rage in the U.S. capital.

The issue has sent hundreds of thousands to protest in streets across America and split the president's Republican Party as midterm congressional elections approach.

The Senate was debating a measure that would strengthen border security, but also would legalize some undocumented workers, establish temporary guest-worker programs and permit illegal immigrants currently in the country to apply for citizenship without first returning home.

The business community and a minority of Republicans in Congress have supported such moves, and the approach tracks more closely with what Mr. Bush has advocated than competing House legislation that focuses on an illegal immigration crackdown.

Fox wants some form of legal status for all illegal Mexicans but sees a guest worker program as a good step. If one is approved before July elections to succeed him — Fox is term-limited from running again — analysts believe it could boost the chances of the candidate from his party.

As for Harper, the newly elected Conservative leader has made it a priority to restore Ottawa's relationship with Washington — strained over Iraq, missile defense and a series of trade issues.

Another issue is Canada's displeasure at a U.S. plan to require passports or other secure identification at every point of entry to the United States.