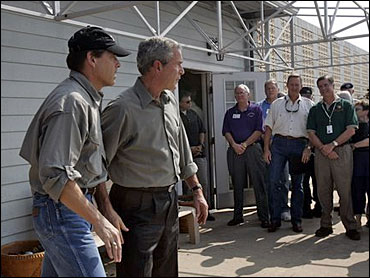 President Bush got a firsthand look Tuesday at Hurricane Rita's damage to U.S. energy resources in the birthplace of the modern oil industry. "Obviously, this area's hurting," Mr. Bush said. "I saw firsthand how it's hurting."

Mr. Bush immediately went into a briefing by state officials in Beaumont, the home to refineries that turn oil into gasoline, many of which were knocked out of power by the storm.

The president said the priorities were to assist people with food and water, restore power and provide fuel. "We fully understand that it's hard to maintain order if you don't have fuel for your cars and first responders," the president said, standing alongside Texas Gov. Rick Perry.

Mr. Bush then went by helicopter to Lake Charles, La., where he surveyed damaged areas inland and along the coast. He observed several refineries, some functioning, others damaged, and also flew approximately a mile offshore, where Marine 1 circled what appeared to be a dormant oil rig, but without obvious signs of damage.

Authorities in Louisiana also were unable to keep bayou residents from venturing in by boat to see if Rita wrecked their homes.

In Vermilion Parish, CBS News Correspondent Cami McCormick reports hundreds of residents Tuesday were clearing their once-flooded homes of ruined furniture, mattresses and appliances. In many cases, they're being helped by neighbors and even friends from other parts of the state. In some instances, they still need boats to carry things out, but once these homes are cleared, they can better determine whether or not they'll need to rebuild their houses.

Debris was strewn for miles over Cameron Parish, a coastal, sparsely populated town next to the Texas line. Seawater pushed as far as 20 miles inland, drowning acres of rice, sugarcane fields and pasture.

"This is the most damaged area I've seen in the state, the worst," Army Lt. Gen. Russel Honore said of Cameron Parish. "I didn't see anything from Katrina, except in Mississippi, that was as bad."

An estimated 80 percent of the buildings in the Louisiana town of Cameron, population 1,900, were leveled. Farther inland, half of Creole, population 1,500, was left in splinters.

Authorities said at least 16 Texas oil refineries remained shut because of Rita. A refinery in Port Arthur and one in Beaumont were without power, and a second Port Arthur refinery was damaged and could remain out of service for two to four weeks.

Quanishia Haynes, whose father died in the Beaumont apartment, said he and his girlfriend's family evacuated to Mississippi as Rita approached. She said they returned about 1 a.m. Monday because they ran out of money.

She and her boyfriend later found everyone in the apartment unresponsive. She said it looked like her father, Billy Coleman, 46, tried to get out of bed and was walking to the door when he fell.

Three siblings — Crystal Farva, 12, Demarcus Bean, 10, Alliyah Reese, 7 — were killed, along with Coleman and Dianna Bean, 29. The children's mother and Bean's sister, Irene Bean, survived along with her 8-year-old son Emery Reese, 8. Both were hospitalized in critical condition.

A neighbor said initially the generator was running outside the apartment, but he said he overheard Coleman and Bean debating over whether to move it indoors so the noise wouldn't bother other neighbors or get stolen. An apartment manager said the generator was found in a closet.