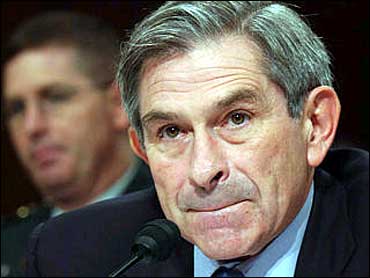 President Bush on Wednesday tapped Defense Deputy Secretary Paul Wolfowitz, who has been a lightning rod for criticism of the U.S. invasion of Iraq and other defense policies, to take over as head of the World Bank.

Mr. Bush told a news conference that Wolfowitz, now Defense Secretary Donald Rumsfeld's top deputy, was "a compassionate, decent man who will do a fine job at the World Bank. That's why I put him up."

The administration began notifying other countries that Wolfowitz was the U.S. candidate to replace World Bank President James Wolfensohn, who is stepping down as head of the 184-nation development bank on June 1 at the end of his second five-year term.

The United States is the World Bank's largest shareholder in the development bank. The bank traditionally has had an American president and its sister institution, the International Monetary Fund, traditionally has been headed by a European.

Mr. Bush, during the news conference, noted that he had called Premier Silvio Berlusconi to talk about Iraq and other issues earlier in the day and said that he had discussed Wolfowitz, "my nominee," with the Italian leader.

"He is a man of good experience," Mr. Bush said. "He helped manage a large organization .... a skilled diplomat, worked at the State Department."

Wolfowitz, 61, was sworn into his post at the Defense Department in March 2001, marking his third tour of duty at the Pentagon.

He was regarded as more academic and ideological than his boss, Rumsfeld. Wolfowitz was among the most forceful of those in the Bush administration in arguing that Iraq's Saddam Hussein had weapons of mass destruction, and he had predicted that Americans would be welcomed as liberators rather than occupiers once they toppled Saddam's government.

Wolfowitz, a veteran of six administrations, has earned a reputation for being a foreign policy hawk — the view that the United States should use its superpower status to push for reforms in other nations. A conservative scholar, Wolfowitz, before taking over the Defense Department post, had served as dean and professor of international relations at the Paul H. Nitze School of Advanced International Studies of The Johns Hopkins University.

House Minority Leader Nancy Pelosi expressed skepticism over Mr. Bush's selection. She said the choice of Wolfowitz to head the World Bank was "hard to understand" and that "I don't see a match of commitment to the vision of the World Bank."

Bernice Romero, advocacy director of Oxfam International, said that it is vital for the next World Bank chief to remain focused on reducing poverty. "It is crucial that the momentum on increasing spending on health and education that was gained during Wolfensohn's tenure is not lost," she said.

The Bush administration, meanwhile, says Wolfowitz is suited for the World Bank post and pointed to his management experiences at the Pentagon and his diplomatic experience at the State Department. He had served as assistant secretary of State for East Asia during the Philippine transition to democracy. He also served as U.S. ambassador to Indonesia.

The World Bank's 24-member board will soon vote on Mr. Bush's selection of Wolfowitz to head the development bank. Approval is expected.

"The executive directors of the board ... are in the process of consultations with the member countries they represent," the World Bank said in a statement.

Wolfensohn, 70, an Australian-born naturalized American has been bank president since June 1, 1995. He has emphasized reducing poverty in developing nations, making lending projects more effective and easing debt burdens for poor countries. Previously, he headed the John F. Kennedy Center for the Performing Arts and was a Wall Street investment banker for 20 years.

Wolfensohn, in a statement, said he has known Wolfowitz personally and professionally for a long time. "I look forward to ... doing everything that I possibly can to ensure a successful transition."

For now, it is expected that Wolfowitz would take over the World Bank post when Wolfensohn's term ends on June 1.

William Cohen, who was secretary of defense during the Clinton administration, praised Wolfowitz.

"He has a keen understanding of the tides and trends that have shaped our world since the end of the Cold War," Cohen said, "and a deep commitment to liberty and improving the quality of life for suffering people."

The Bush administration has been pushing for major reforms in how the World Bank operates, especially interested in having the development bank dole out aid in the forms of grants, which don't have to be repaid, rather than loans.