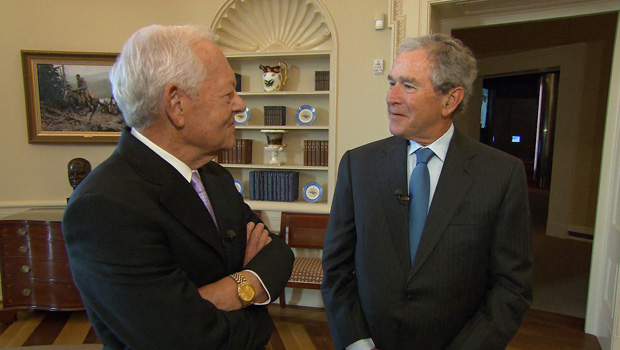 In a two-part interview to air on CBS' "Sunday Morning" and "Face the Nation," President George W. Bush tells CBS News' chief Washington correspondent Bob Schieffer that he was surprised to learn Saddam Hussein did not believe he would take military action in 2003.

Mr. Bush talks with Schieffer about his new book, in which he discusses his relationship with his father, President George H.W. Bush, and the decision to send troops into Iraq, among other topics.

Mr. Bush told Schieffer he was surprised Hussein didn't leave Iraq when the United States threatened to go to war.


"You know, when he was captured -- I was told that the FBI agent that talked to him, he said, 'I just didn't believe Bush,'" he said. "And it's hard for me to believe he didn't believe me.

Mr. Bush also said he has no regrets about going to war.

"No, I think it was the right decision," President Bush said. "My regret is that -- a violent group of people have risen up again. This is 'Al Qaeda plus.' I put it in the book, they need to be defeated. And I hope we do. It's - I hope that the strategy works."

The first part of Schieffer's interview with Mr. Bush will be presented on "Sunday Morning," November 9 at 9:00 a.m. ET, on CBS.

The second part will be presented on the 60th anniversary broadcast of "Face the Nation" on Nov. 9, at 10:30 a.m. ET on the CBS Television Network.