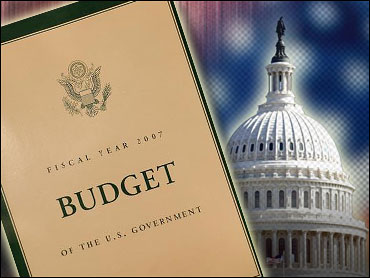 President Bush sent Congress a $2.77 trillion spending plan on Monday that would bolster the nation's war against terrorism but squeeze many other government programs in an effort to deal with an exploding budget deficit projected to hit an all-time high this year.

Mr. Bush, hoping to get his domestic agenda back on track after a year of political setbacks, sent Congress a budget blueprint that emphasizes keeping the country strong militarily while offering mostly modest initiatives to deal with voter anxiety about rising global competition, soaring energy prices and skyrocketing medical bills.

"My administration has focused the nation's resources on our highest priority, protecting our citizens and our homeland," Mr. Bush said in his budget message. "Working with Congress, we have given our men and women on the front lines in the war on terror the funding they need to defeat the enemy and detect, disrupt and dismantle terrorist plots and operations."

Mr. Bush's spending proposals, contained in four massive volumes featuring green and beige covers, are for the 2007 budget year that begins next Oct. 1. The $2.77 trillion in spending would be up by 2.3 percent from projected spending of $2.71 trillion this year.

The administration in its budget documents said the deficit for this year will soar to an all-time high of $423 billion, reflecting increased outlays for the Iraq war and hurricane relief.

But the administration says the deficits will be on a declining path over the next five years, which would allow the president to achieve his goal of cutting the deficit in half by 2009, the year he leaves office.

Mr. Bush is also seeking savings by trimming the growth of spending in Medicare, the government's giant health care program for the elderly and disabled, by $35.9 billion over five years, and making similar reductions in a number of other benefit programs.

"These are not cuts," White House Budget Director Joshua Bolten told reporters of Mr. Bush's Medicare plans. "These are modest reductions in the rate of growth."

With the various reductions, Mr. Bush is able to meet his goal of cutting the deficit in half from 2004 while making permanent sweeping tax cuts enacted during his first term that are now scheduled to end after 2010.

Democrats attacked what they said were Mr. Bush's skewed priorities. They said he was trying to impose austere budgets that will harm programs for the poor while protecting tax cuts Democrats said were going primarily to the wealthy.

Senate Minority Leader Harry Reid, D-Nev., said that the budget was "filled with pages of giveaways to special interests and cuts to those who can least afford it."

Responding, presidential spokesman Scott McClellan said, "The president is focused on making sure that we keep our economy growing, and that means keeping taxes low."

Republicans in Congress expressed support for the spending document, which will kick off months of debate likely to last until the next budget year begins in October and perhaps beyond.

"We have to face up to this fiscal reality that this baby boom generation is going to retire soon and we need to do something about it," said Senate Budget Committee Chairman Judd Gregg, R-N.H.

In addition to trimming Medicare, other proposed Bush savings in so-called mandatory spending, because the payments are set in law for all who are eligible, include $4.99 billion in changes in farm commodity programs, and $16.7 billion in reforms of the Pension Benefit Guaranty Corp., the government program that backs private pensions.

The biggest spending increase would go to the military, a 6.9 percent rise to $439.3 billion for 2007, a figure that does not include the costs of fighting wars in Iraq and Afghanistan. The administration said last week it will ask Congress for an additional $120 billion to cover fighting for the rest of this year and the early part of 2007 while seeking another $18 billion in hurricane relief this year.

While the Department of Homeland Security would also see an increase for 2007, nine of the 15 Cabinet-level agencies would see outright cuts in their discretionary spending for next year.

To achieve this goal, Mr. Bush is seeking savings of $14.5 billion by eliminating and drastically scaling back 141 government programs, CBS News White House correspondent Mark Knoller reports. Last year, he targeted 154 such programs and won two-fifths of the spending cuts he requested, amounting to $6.5 billion in savings.

Even programs not targeted for elimination are subject to tight budgets including such previously favored agencies such as the National Institutes of Health.

The spending plan does contain some winners in the domestic arena.

Set for higher spending, as highlighted in Mr. Bush's State of the Union address, are programs to address soaring energy costs through development of alternative fuels, rising medical bills through expanded health savings accounts and global competition through a new "American Competitiveness Initiative."

That initiative would extend an expired business tax break for research and development, double the government's commitment to basic scientific research and train thousands of new science and math teachers.

Instead of pushing last year's Social Security overhaul proposal, the president is calling for creation of a bipartisan commission to study ways to deal with soaring spending for Social Security, Medicare and Medicaid.