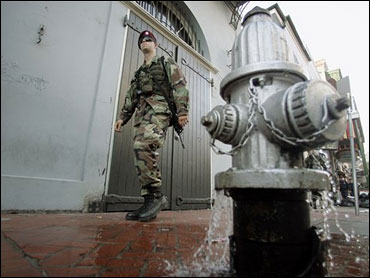 President Bush is asking Congress for as much as $50 billion in immediate aid for the Hurricane Katrina catastrophe, and the White House indicated Wednesday more money eventually would be needed.

The federal government also announced plans to dole out debit cards worth $2,000 each to victims of Hurricane Katrina, according to media reports.

The unprecedented cash card program initially will benefit stranded people who have been moved to rescue centers such as the Houston Astrodome. The program was outlined by Homeland Security Department officials in a conference call with state leaders Wednesday morning, according to a governor and another state official who spoke on condition of anonymity because the program had not been publicly announced.

The cards would be used to buy food, transportation, gas, and other things the displaced people need, Homeland Security officials told state leaders, according to an official who participated in the call and spoke on the condition of anonymity.

Meanwhile, Senate Republican chairmen pledged to focus on recovery — and investigate later why the initial response was ineffectual, while Democrats pressed for investigations and the firing of the head of the Federal Emergency Management Agency now.

As floodwaters began to slowly recede with the city's first pumps returning to operation, Mayor Ray Nagin authorized law enforcement officers and the U.S. military to force the evacuation of all residents who refuse to heed orders to leave.

The city faces the new threat of floodwaters that have become a toxic stew of chemical and biological waste, and growing concern over oil and gas leaks, reports CBS News correspondent Byron Pitts. Authorities fear an explosion, with no running water to fight fires.

Police Capt. Marlon Defillo said that forced removal of citizens had not yet begun. "That's an absolute last resort," he said.

U.S. Marines in New Orleans say they will not forcibly evacuate anyone; they are not law enforcement, reports CBS News correspondent Cami McCormick.

Nagin's order targets those still in the city unless they have been designated as helping with the relief effort.

The move — which supersedes an earlier, milder order to evacuate made before Hurricane Katrina crashed ashore Aug. 29 — comes after rescuers scouring New Orleans found hundreds of people willing to defy repeated warnings to get out.

Although many states and cities across the country have sent police and firefighters to New Orleans, evacuating the city's holdouts may be best left to the Crescent City's own emergency workers.

"When we were down in the French Quarter trying to get some of the people out there yesterday, the people that lived there didn't give particularly a kind eye to someone from the outside saying you have to get out," reports CBS News correspondent Lee Cowan. "But when someone from the New Orleans police department showed up, they understood, they chatted a little bit. They both have something in common, unfortunately, in these circumstances."

New York Sen. Hillary Clinton is calling for FEMA's removal from the Department of Homeland Security and questions the experience of FEMA chief Mike Brown.

"If, in the end, there's an investigation and they say 'This wasn't done right,' who's accountable?"

It appears President Bush is distancing himself from Brown, reports CBS News White House correspondent Mark Knoller. Brown was not among those briefing Mr. Bush Wednesday morning on the situation.

In the first government estimate of Katrina's economic impact, the bipartisan Congressional Budget Office said the damage seemed likely to reduce employment by 400,000 in coming months and to trim economic growth by as much as a full percentage point in the second half of the year.

At the White House, press secretary Scott McClellan said the administration was acting quickly on an emergency supplemental measure for Katrina efforts because a $10.5 billion down payment approved last week "is being spent more quickly than we even anticipated."

McClellan added, "There will be more that will be needed."

The pumping began after the Corps used hundreds of sandbags and rocks over the Labor Day weekend to close a 200-foot gap in the 17th Street Canal levee that burst in the aftermath of the storm and swamped 80 percent of this below-sea-level city.

In a plea to those who might be listening to portable radios, Nagin warned that the fetid floodwater could carry disease and that natural gas was leaking all over town.

"This is not a safe environment," Nagin said. "I understand the spirit that's basically, 'I don't want to abandon my city.' It's OK. Leave for a little while. Let us get you to a better place. Let us clean the city up."

To that end, the Pentagon began sending 5,000 paratroopers from the Army's 82nd Airborne Division to use small boats to launch a new search-and-rescue effort in flooded sections of the city.

Some people may already be heeding the mayor's message. After surviving for days in New Orleans, Johnnie Lee MacGuire finally accepted an offer to evacuate.

Floodwaters also had receded from St. Bernard Parish southeast of New Orleans, but it was still a disaster scene with bedroom dressers and hot tubs scattered on roofs, toilet seats dangling in tree limbs and cars overturned in driveways. Water gurgled and spouted where natural gas seeped from below.

The effort to accurately catalogue Mississippi's toll was struggling to keep up with the decaying effect of 90-degree heat.

Even when cadaver dogs pick up a scent, workers say they frequently can't get at the bodies without heavy equipment. That's leading officials to estimate that more than 1,000 people could be dead.

"The state doesn't know the answer," said Lea Stokes, a spokeswoman for the Mississippi Emergency Management Agency. "I know people don't want to hear that, but we just don't know."

"We get a lot of information about New Orleans, but I don't even know how bad Alabama and Mississippi are," said Darryl Moch, 32, of Portland, Oregon, who has tried for days to locate his best friend, Leon Harvey Packer, of Biloxi. "How bad was Mississippi hit? What's the number of people displaced? What's the estimated damage?"