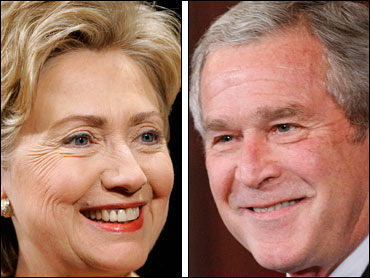 Mr. Bush also predicts that Clinton will be defeated in the November 2008 general election by the Republican nominee.

"I believe our candidate can beat her but it's going to be a tough race," the president said.

In primary election voting and party caucuses early next year voters either choose representatives who will nominate a candidate at party conventions in mid-2008 or indicate a preference for a candidate.

At the end of the primary process, leading candidates from both parties usually emerge forcing rivals to drop out of the race.

It has been difficult for Mr. Bush to remain silent about the 2008 president race, despite his promises not to be the "prognosticator in chief." He has been talking about the race and handicapping candidates during off-the-record chats with visitors to the White House.

He finally went public with his Clinton prediction in an interview for a book by journalist Bill Sammon.

"She's got a great national presence and this is becoming a national primary," Mr. Bush told Sammon. "And therefore the person with the national presence, who has got the ability to raise enough money to sustain an effort in a multiplicity of sites, has got a good chance to be nominated."

"Frankly, it's difficult to not talk about the '08 election a lot," White House press secretary Dana Perino said. "There's a lot of interest in it and it does have consequence."

She denied the notion that Mr. Bush was talking up Clinton's prospects in order to energize the Republican base against her candidacy.

"The bottom line is, it really doesn't matter what the president thinks about who will win the Democratic primary," Perino said. "There's going to be a showdown ...and they'll figure out whose going to be the nominee and from there the president will campaign vigorously for the Republican candidate.

On the Republican side, Mr. Bush has expressed surprise that former New York mayor Rudy Giuliani remains the front-runner despite his liberal positions on social and cultural issues normally critical to the party base, according to The Washington Post. It ran a story about Bush's recent off-the-record chat with television news anchors and Sunday show hosts.

Mr. Bush said Giuliani's popularity was a sign of how important the terrorism issue is to Republican voters, the newspaper said. It said Mr. Bush cautioned against ruling out Sen. John McCain, saying he had managed to revive his campaign after an implosion earlier this year.