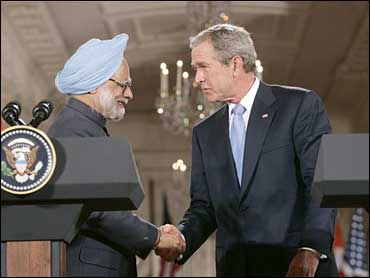 President Bush said Monday that the United States and India have built their strongest relationship yet as he hosted an elaborate day of ceremony for the country's prime minister at the White House.

"India and the United States share a commitment to freedom and a belief that democracy provides the best path to a more hopeful future for all people," Mr. Bush said at a news conference with Indian Prime Minister Manmohan Singh. "We also believe that the spread of liberty is the best alternative to hatred and violence."

But besides all the pomp, Mr. Bush wasn't willing to fulfill one of Singh's top wishes — support for a permanent seat on the Security Council of the United Nations. Singh said he still made his case during their Oval Office meeting.

"India has a compelling case for permanent membership on the Security Council," Singh said. "We are convinced that India can significantly contribute to U.N. decision-making and capabilities."

Considering a litany of alleged mismanagement, corruption and other failings at the world body, U.S. officials think an overhaul of U.N. operations must be under way before any reshaping or expansion of the Council can be considered. The United States, Russia, China, Britain and France now hold the only five spots.

Although U.S. officials said Singh was getting a firm "no" on his request, he looked for common ground. "In our talks, the president and I were of one mind that the contemporary reality must be fully reflected in the central organs and decision-making processes of the U.N.," he said.

Pressure around the meeting was eased somewhat Sunday when the foreign ministers of populous India, Brazil, Germany and Japan said they would not seek a change in the council's makeup until the end of July while they negotiate with the 53-nation African Union.

Council membership was likely to be among few negatives to interfere with Singh's official visit with President Bush, which also included a welcome ceremony and a gala dinner. Mr. Bush also told Singh that he plans to visit India.

The White House rolled out full pomp and pageantry for Singh's visit, with a bewigged fife and drum corps marching across the South Lawn during the welcome ceremony. The two leaders walked side-by-side and inspected a long line of troops in dress uniform.

Administration officials say the pomp was designed to emphasize the growing importance to the United States of India, a rising economic and military power whose newfound affinity for the United States is something Mr. Bush considers a major foreign policy success.

"Our nations believe in freedom, and our nations are confronting global terrorism," Mr. Bush said at the welcome ceremony. "As diplomatic partners, we're meeting this threat in our own nations and abroad. ... The relationship between our two nations has never been stronger, and it will grow even closer in the days and years to come."

India's first prime minister, Jawaharlal Nehru, was a founder of the Cold War's Nonaligned Movement, which Nehru considered a "third way" beyond what he considered the imperialism of both Western capitalism and Soviet-style communism. In practice it gravitated toward the latter, which often put India severely at odds with U.S. policies.

The detente began 18 months ago with signing of the Next Steps in the Strategic Partnership accord. It laid out a path to bring the two democracies into a fully cooperative relationship in economic and military affairs, energy, the environment, space and technology and other matters. A military cooperation agreement was signed this year, and as many as 16 new cooperative arrangements are planned for the Singh visit.

For now, however, the U.N. question will be a difficult sell for the Indians.

"We believe very strongly that the larger issues of U.N. reform also have to be addressed; and if we have U.N. Security Council reform out of phase with the larger U.N. reforms, then we will not do justice to the organization," Secretary of State Condoleezza Rice told an Indian interviewer during the weekend.

After she spoke, the Bush administration made it even clearer. A senior official said that if the vote on expansion were now, the United States would vote against its own position, stated last month, that endorsed an addition of "two or so" permanent members, one of them Japan, without veto power.

At a meeting in New York on Sunday, the foreign ministers of India, Japan, Germany and Brazil acknowledged they lacked the necessary two-thirds majority of the 191-member U.N. General Assembly for change without the backing of the African nations, which have their own proposal for reorganizing the Security Council.