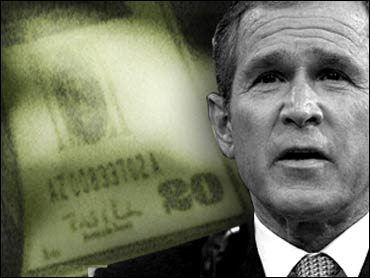 President Bush wants to stiffen work requirements for welfare recipients, spend up to $300 million to encourage single mothers to get married and open the door to job training, as Congress opens debate on what changes are needed to a landmark 1996 overhaul.

In expanding the main goal of a 5-year-old welfare program set to expire this year, Mr. Bush said he was pleased with initial results but "our work is not done."

"We ended welfare as we've known it, yet this is not a post-poverty America," the president said Tuesday in excerpts from a speech in which he will lay out his welfare reform principles. "Child poverty is still too high, too many families are strained and fragile and broken — too many Americans still have not found work and the purpose it brings."

Nationwide welfare rolls have dropped by about 3 million families under the overhaul that took effect in 1996 with bipartisan support. Congress must now renew the program.

A senior administration official, estimating that there were still 2 million families on the welfare rolls, said: "We need to keep the train on the track it is now."

The president also wants to maintain the five-year ban on benefits for legal immigrants.

The biggest change would be a sharp increase in work requirements facing states.

Under current law, states are required to have 50 percent of their welfare populations engaged in a work activity for at least 30 hours a week.

The president's plan would increase the percentage of welfare recipients required to have jobs or take part in related activities by 5 percent a year until it reaches 70 percent in 2007.

It would require a 40-hour work week instead of 30, and provide help for parents with infants and those who need substance-abuse treatment, rehabilitation or special work-related training.

The plan also makes it considerably harder for states to meet these targets. For the last five years, the 50 percent minimum has been almost meaningless, because states have largely met the requirement by reducing the number of people on welfare at all, meaning it didn't matter how many people were officially meeting the work requirement. The Bush plan would eliminate this caseload reduction credit.

At the same time, Mr. Bush would allow states to put recipients in education, training and other programs for up to two days a week, or 16 hours, administration officials said. In addition, states could put people into job training full time for three months, once every two years.

Opponents called the president's proposal "welfare in wonderland," saying it was "truly bizarre" to expect them to find work in the middle of an economic recession.

"It represents a huge step backwards," said Deepak Bhargava, director of the National Campaign for Jobs and Income Support. "The Bush welfare reauthorization proposal runs counter to everything we have learned in the past five years about what helps poor families survive."

A senior administration official said Mr. Bush had four goals for continuing the transformation of welfare: "We will strengthen work requirements; we will promote strong families; we will give states more flexibility in welfare spending, and we will show compassion to those in need by restoring nutrition benefits for legal immigrants."

President Bush also would direct up to $300 million to experimental programs that encourage recipients to get married, such as premarital counseling and education, including $200 million in federal dollars and the rest from states.

That includes $100 million for federal grants, dollars that are now used for bonuses to reward the states that most significantly reduce births to unwed parents.

Another $100 million would be carved out of a second bonus program which rewards states for overall success in their welfare programs. States could apply for this money and would have to match it with their own dollars, meaning spending here would total $200 million if there are enough applications.

This would leave $100 million each year for the "high-performance" bonuses, down from $200 million.

The administration already has detailed many of its other welfare ideas.

Currently, government keeps a portion of the money collected to pay overdue child support in cases of families that have received welfare. Mr. Bush would offer financial incentives to induce the states to give "as much of this money as possible" to mothers and children, especially mothers who have left welfare.

Mr. Bush also wants to maintain child care funding and to renew a program that gives an extra $319 million to states that have historically low welfare benefits and therefore get less money from the federal government today.

The president would continue the current five-year ban on welfare benefits for noncitizens entering the country after 1996. But Mr. Bush would allow legal immigrants to receive food stamps five years after entry; current law shuts them out altogether.

Welfare rolls plummeted during the strong economy of the late 1990s, when tough rules pushed people off the rolls and there were many jobs available that required little education or experience. Welfare caseloads are now rising in many states, and the full impact of the sour economy is still unclear.