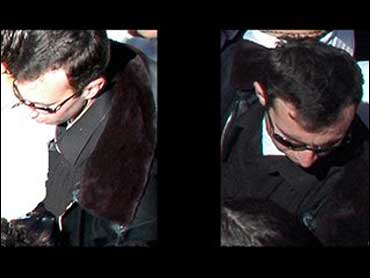 A man arrested after a fatal shootout with police has admitted to throwing a grenade at a rally in May where U.S. President George W. Bush was making a speech, a Georgian official said Thursday.

Deputy Health Minister Irakly Giorgobiani said on Rustavi-2 television that the suspect made the admission in the hospital, where he is being treated for wounds suffered during a shootout that erupted in a village on the outskirts of the capital, Tbilisi, when police tried to arrest him late Wednesday.

One policeman was killed and the suspect, Vladimir Arutyunian, fled into the woods. He was captured about an hour later and taken to a hospital for treatment of gunshot wounds.

There was no immediate indication from authorities whether he was connected to any separatist groups in Georgia's breakway region of Abkhazia or nearby Chechnya. A news conference by the Interior Ministry was expected later Thursday.

Video released Thursday by Georgian authorities showed the suspect lying on a gurney being wheeled from the scene, one of his cheeks swollen and bloody. He made an obscene gesture at the camera.

Bush and Georgian President Mikhail Saakashvili were on the podium in front of a massive crowd in downtown Tbilisi when the live grenade was thrown. The grenade landed less than 100 feet from the podium but did not explode.

A preliminary investigation indicated the activation device deployed too slowly to hit the blasting cap hard enough, the FBI said.

In a statement Thursday, the U.S. Embassy in Georgia said it "welcomes the news that the Georgian Ministry of Internal Affairs, through joint efforts with the Federal Bureau of Investigation, diligent detective work and a strong commitment to solving this case, have taken into custody a suspect." But the embassy declined comment on whether the FBI was involved in the arrest or follow-up.

Georgian authorities had released a photo Monday of the suspect and announced a reward of about $80,000 for information leading to his identification.

Officials on Thursday were giving little information about Arutyunian, described in news reports as being in his mid-20s and unemployed. But Interior Ministry spokesman Guram Donadze said grenades and unspecified chemicals were found in a search of Arutyunian's residence.

The video showed police sorting through a pile of items apparently found in his apartment, including a book called "Initial Military Training" that was part of the standard curriculum in Soviet schools.

The FBI statement contradicted the reports and identified it as a live hand grenade, whereas initial Georgian statements said it appeared to have been an "engineering grenade," a device that is not designed to spread shrapnel.

Bush spoke from behind bulletproof glass as he addressed a huge crowd in a main Tbilisi square as part of a visit aimed at cementing relations between the United States and Georgia's new pro-Western leadership.