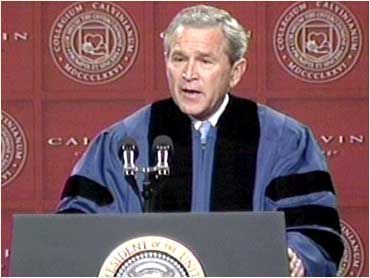 President Bush's commencement speech at Calvin College Saturday was as much about politics as it was about inspiring the graduates of this Christian college to commit themselves to community service.

"This isn't a Democratic idea. This isn't a Republican idea. This is an American idea," Bush told the students in a bipartisan message about community service that stood in contrast with protests surrounding his visit.

"As your generation takes its place in the world, all of you must make this decision: Will you be a spectator or a citizen?" Bush asked about 900 seniors graduating from this liberal arts college.

The students cheered him warmly before he spoke, but Mr. Bush's visit was not welcomed by all.

Several dozen people protested outside the event, wearing buttons that said: "God is not a Republican or Democrat."

A third of the college's faculty members signed a letter protesting his visit. The letter, published Saturday in a half-page ad in the Grand Rapids Press, said: "As Christians, we are called to be peacemakers and to initiate war only as a last resort. We believe your administration has launched an unjust and unjustified war in Iraq."

Another letter of protest from students, faculty and alumni appeared in a full-page ad in the paper on Friday.

"In our view, the policies and actions of your administration, both domestically and internationally over the past four years, violate many deeply held principles of Calvin College," that ad in the Grand Rapids newspaper said.

Calvin College administrators say they were thrilled when the White House asked if Bush could speak at the commencement -- his third trip this year to Michigan, which he narrowly lost to Democrat John Kerry in last year's election.

Mr. Bush's speech here is one of only two commencement addresses he's giving this year. Next Friday, he speaks at the U.S. Naval Academy.

The choice of the 4,000-student Christian college led to speculation that the president wanted to reach out to his evangelical base in this Midwestern state. But some associated with the college noted the school's Christian background does not make it part of the conservative Christian movement.

In his commencement speech, Bush mentioned advancing freedom around the world and voiced his support for faith-based, or religious, groups getting involved in social service.

"To make a difference in this world, you must be involved by serving a higher calling here and abroad," Bush said. "You will make your lives richer and build a more hopeful future for our world."

His appearance was not all serious.

"Some day you will appreciate the grammar and verbal skills you learned here," quipped the president who is not known for his eloquence. "If any of you wonder how far a mastery of the English language can take you, just look what it did for me."