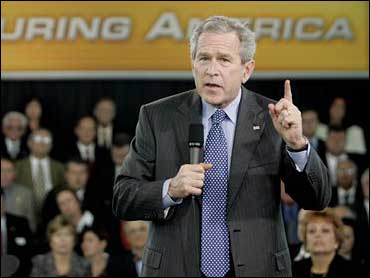 Appealing for patience, President Bush said Friday that Americans should not be discouraged by setbacks in Iraq and said the nation must realize that it is still at war.

The president said the "tendency of folks is to say this really isn't a war. People kind of want to slip to the comfortable."

But he said the nation still faces a ruthless enemy in Iraq that has no regard for human life.

"We shouldn't be discouraged about setbacks, short term setbacks, or the enemy's capacity to take innocent life, because we've seen democracy change the world in the past," Bush said.

His remarks reflected the tough-on-terrorism theme that proved so successful during his re-election campaign. White House aide Karl Rove already has advised Republicans to make national security the top partisan issue in the November midterm elections.

Mr. Bush spoke at a cruise ship terminal at the Port of Tampa, pacing the stage with a microphone in his hand. He spoke before an invited audience arrayed around him on all sides.

Before his address, the president received an update on the war on terrorism in a private, hour-long briefing at the U.S. Central Command at MacDill Air Force Base, which oversees forces in Iraq and Afghanistan.

The figure includes six military civilians. At least 1,781 died as a result of hostile action, according to the military's numbers.

Mr. Bush spoke before a friendly audience and took questions after his prepared remarks. The first questioner said the nation was blessed to have Mr. Bush as president. The next questioner referred to Florida Gov. Jeb Bush as "your great brother."

Later in the afternoon the president will attend a Florida Republican Party dinner in Tampa, Florida before returning to the White House.