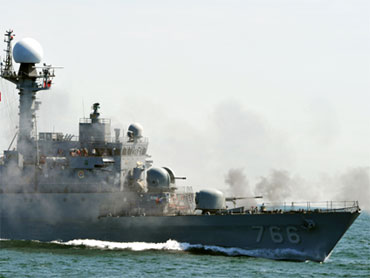 a television commercial
to remove the president and the podium where he was standing. The campaign said the ad will be re-edited and reshipped to TV stations.

A group of soldiers in the crowd was electronically copied to fill in the space where the president and the podium had been, aides say.

"There was no need to do that," said Mark McKinnon, head of Bush's advertising team who shouldered the blame. "Everyone technically works for me so I accept the responsibility."

The original photograph shows a sea of soldiers sitting behind the president as he stands at a podium just left of the center of the frame. Mr. Bush was speaking at Fort Drum in New York on July 19, 2002.

Democrats said it is fitting that the president would fabricate an advertising image.

McKinnon said a video editor he declined to identify was told to edit the picture to focus on a young boy waving a flag. On his own initiative, the editor removed the podium and copied the faces, McKinnon said.

"I didn't even know it was done," he said. The doctoring was first revealed on an Internet site. "There was no intention on anybody's part to try to represent anything that wasn't true," McKinnon said

The Bush campaign noted that Mr. Bush was addressing a large group of troops in both the original and edited version.

"Bush is talking to the troops, the troops are real," said Bush spokesman Steve Schmidt said. He noted that the crowd the president was speaking to was much larger than depicted in the ad.

The ad, released Wednesday, is an emotional appeal in which Mr. Bush defends his decision to go to war and empathizes with fallen soldiers and their families.

The ad is running on national cable networks and in local media markets in at least one state, Ohio.

The issue was first mentioned on the liberal Web log www.dailykos.com.