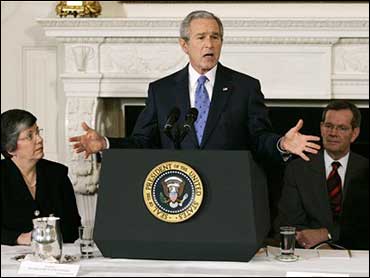 President Bush encouraged governors Monday to support his call for changing the tax code to help more people buy private healthcare insurance, but did not address their pleas to increase funding for a healthcare program that insures millions of children of the working poor.

Still, governors said they heard words of at least partial compromise from the administration on a budget dispute that dominated private discussions among governors Sunday.

At stake is coverage for 6 million people, overwhelmingly children, as well as the hopes of many governors in tackling the larger challenge of the uninsured. All governors rely on the State Children's Health Insurance Program, intended to aid uninsured working families.

Mr. Bush, welcoming the governors after they met privately with several administration officials, did not offer any comments about the children's health program, talking rather about his larger proposals.

"I'm looking forward to working with Congress on health care. I firmly believe ... that states are often times the best place to reform systems and work on programs that meet needs," he said.

But Health and Human Services Secretary Mike Leavitt "made it clear that the administration will work with Congress as far as" short-term shortfalls, said North Dakota Gov. John Hoeven, a Republican. Governors say 14 states could run out of cash before October. In Georgia, it could happen as soon as March.