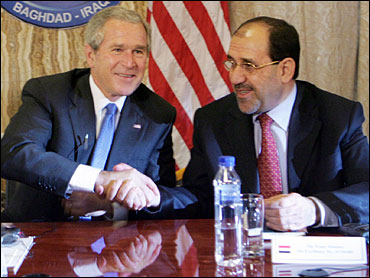 
"Things have changed since the election. He's going to acquaint him with the (new) realities." That's the way one State department official described the purpose of next week's suddenly announced trip to Amman, Jordan by President Bush for a two-day summit meeting with Iraq's prime minister, Nuri al-Maliki.

The meeting between the two leaders will come as multiple Iraq policy reviews are under way by nearly everyone with a role in the reformulation of American strategy in Iraq. Officials note Mr. Bush has had regular contact with Maliki but most of that has been via telephone or video teleconference, not in face to face meetings. Maliki has visited the White House and the president did drop in to see Maliki last June, but the fact that trip was unannounced and came as a surprise even to the Iraqi leader caused some friction in Baghdad.

Now, a senior State Department official said, the American people are demanding new actions from the Bush administration and that, by extension, means they are expecting the Iraqis to do more to control security in Iraq. Violence in Iraq, especially in Baghdad, appears more and more to be out of control. A new United Nations report records high levels of civilian deaths (120 a day in October), and both leaders are feeling increasingly pressured to find new solutions designed to improve daily life inside Iraq, starting with the security situation.

The bipartisan Iraq Study Group, chaired by former Secretary of State James A. Baker, III, is expected to make its recommendations before the end of December and the White House, State Department and Pentagon are all doing their own policy scrubs, trying to respond to their boss' mandate to come up with "fresh perspectives." The president's meeting with Maliki also falls in that category, officials say.

Mr. Bush, face to face, will be able to impress on Iraq's leader the necessity of acting more boldly to take control of his own country and, most especially, to crack down on the sectarian violence. A senior U.S. official said of the summit: "This is consultation, not decision-making," and here "the dialogue will play out over a couple of days." Put another way, he said "Jordan is not a place where policy changes will be announced or new initiatives unfurled."