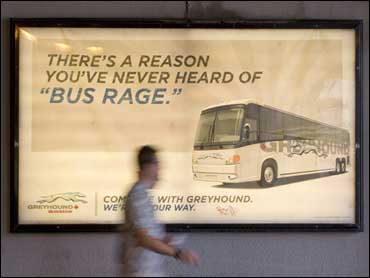 Greyhound has scrapped an ad campaign that extolled the relaxing upside of bus travel after one of its passengers was accused of beheading and cannibalizing another traveler.

Greyhound spokeswoman Abby Wambaugh said Wednesday a billboard and some tunnel posters near a bus terminal in Toronto are still up and would be removed later in the day.

"Greyhound knows how important it is to get these removed and we are doing everything possible," Wambaugh said. "This is something that we immediately asked to be done last week, realizing that these could be offensive."

Vince Weiguang Li, who immigrated to Canada from China in 2004, is charged with second-degree murder in the death of 22-year-old carnival worker Tim McLean. He has yet to enter a plea.

Thirty-seven passengers were aboard the Greyhound from Edmonton, Alberta, to Winnipeg, Manitoba, as it traveled at night along a desolate stretch of the TransCanada Highway about 12 miles from Portage La Prairie, Manitoba. Witnesses said Li attacked McLean unprovoked, stabbing him dozens of times.

As horrified passengers fled the bus, Li severed McLean's head, displaying it to some of the passengers outside the bus, witnesses said.

A police officer at the scene reported seeing the attacker hacking off pieces of the victim's body and eating them, according to a police report.

Wambaugh said the ads only appeared in Canada and that some in Ontario and western Canada have already been removed. About 20,000 inserts of the Greyhound ads were scheduled to be put into an Alberta Summer Games handbook but they stopped the presses.