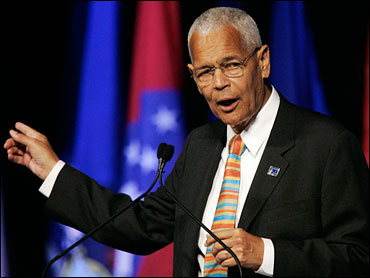 There was no mourning at this funeral.

Hundreds of onlookers cheered Monday afternoon as the NAACP put to rest a long-standing symbol of racism by holding a public burial for the N-word during its annual convention in Detroit.

"Today we're not just burying the N-word, we're taking it out of our spirit," said Detroit Mayor Kwame Kilpatrick. "We gather burying all the things that go with the N-word. We have to bury the pimps and the hos that go with it."

"Die N-word, and we don't want to see you round here no more."

National Association for the Advancement of Colored People delegates from across the country gathered at downtown's Cobo Center and marched about a quarter-mile to Hart Plaza for a ceremony and rally.

Along the way, two Percheron horses pulled a pine box on top of which sat a bouquet of fake black roses.

The N-word has been used as a slur against blacks for more than a century. It remains a symbol of racism, but also is used by blacks when referring to other blacks, especially in comedy routines and rap and hip-hop music.

Public discussion on the word's use increased last year following a tirade by "Seinfeld" actor Michael Richards, who used it repeatedly while on stage at a Los Angeles comedy club.

Black leaders, including the Revs. Jesse Jackson and Al Sharpton, have challenged the entertainment industry and the American public to stop using the N-word and other racial slurs.

NAACP National Board Chairman Julian Bond repeated the call during the opening address Sunday night for the 98th annual convention, which runs through Thursday.

"While we are happy to have sent a certain radio cowboy back to his ranch, we ought to hold ourselves to the same standard," Bond said. "If he can't refer to our women as `hos,' then we shouldn't either."

The NAACP held a symbolic funeral in Detroit in 1944 for Jim Crow, the systematic, mostly Southern practice of discrimination against and segregation of blacks from the end of post-Civil War reconstruction into the mid-20th century.