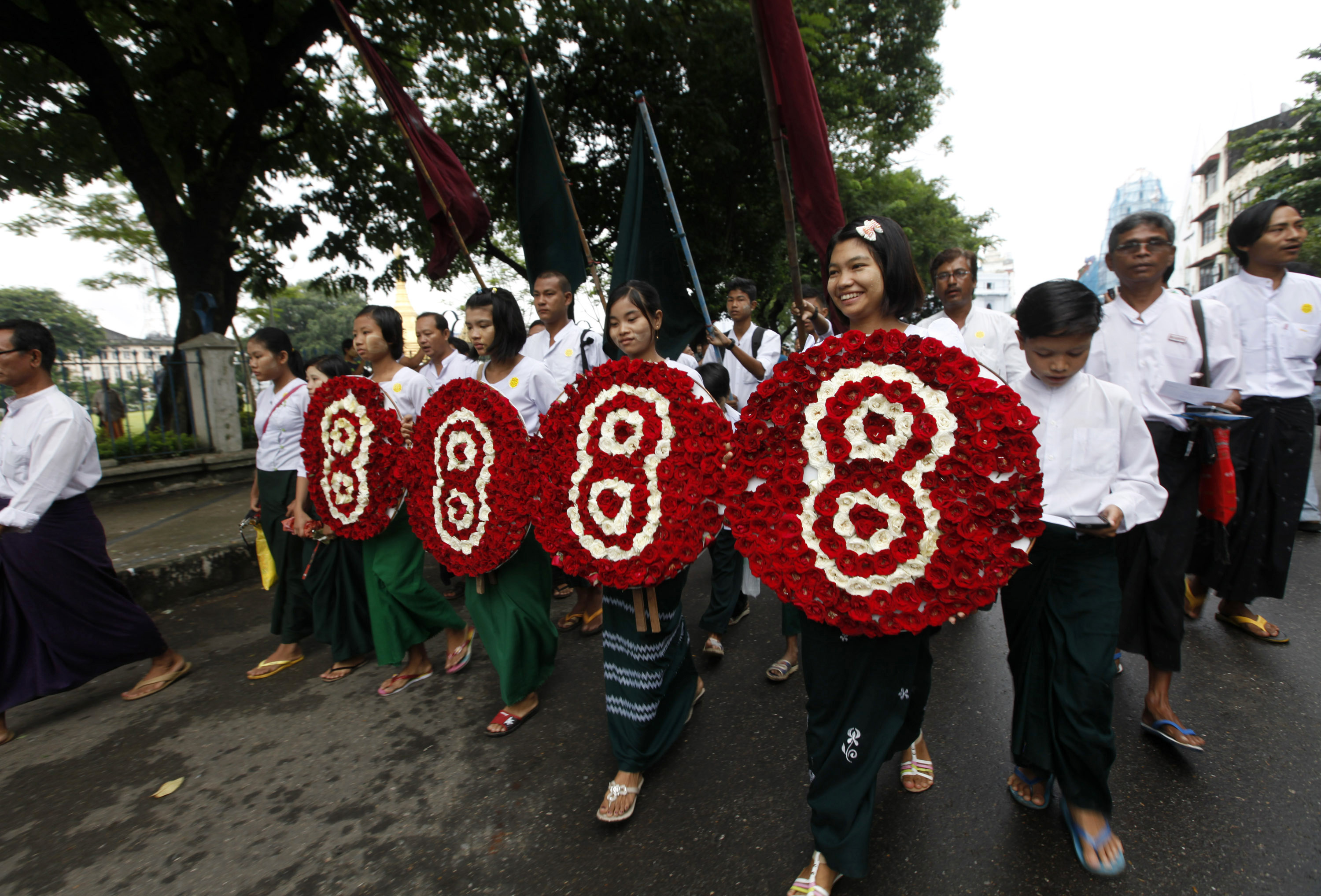 YANGON, Burma Twenty-five years later, you can still see the fear in the eyes of the doctors - two young men carrying a schoolgirl, her blouse drenched in blood, through streets where soldiers were brutally crushing pro-democracy protests.

The photograph, thrust to prominence when it ran on the cover of Newsweek, came to symbolize the defeat of a 1988 uprising in Burma, which is also now known as Myanmar. The revolt's end cemented the power of the military, sent thousands of activists to prison and helped bring a future Nobel Peace Prize laureate, Aung San Suu Kyi, to prominence.

Only now, a generation after the events of the day known as "8.8.88," is Win Zaw beginning to talk about it all.

He is the doctor in the back of the scene, his glasses slipping down his nose as he struggles to carry the bloody girl. Today, two years after Burma's military junta handed over power to a quasi-civilian government, he still hesitates to summon that long-ago day. And for many people in Burma, their own painful history remains little more than a whisper.

"The door is only open a little bit," says Win, now 48, taking long pauses as he tries to find the right words. "I want to talk, for the sake of history, and all those who died. In my heart, I feel like this is the right time. But still I feel insecure."

It is a story from so many nations that have struggled with the aftermaths of their own horrors. When is the right time to push long-hidden conversations into the open, to deal with the past, to cope?

Argentina faced this in the years after the Dirty War of the 1970s, when the nation tried to move past decades of military oppression. It happened in Cambodia, where the savagery of Pol Pot's regime trained an entire nation to remain silent.

It has happened repeatedly in modern China, where the 1989 Tiananmen crackdown remains a largely forbidden topic, and where even the half-century-old historical realities of the "Great Leap Forward" - Mao Zedong's disastrous policies that led to widespread famine and the deaths of tens of millions in the late 1950s and early 1960s - have come into the open only recently.

"We avoided even making reference to it," said Dali Yang, a political scientist at the University of Chicago who was born and raised in China. "There's still a constant tug of war, between the censors and the people who want to tell the truth ... Subtly, gradually, though, this is beginning to change."

When change does come, though, where does it come from? How do fear and silence eventually get out of the way so that a country can openly discuss its own history?

Some of it is simply the power of time. Powerful politicians die. History's traumatic events are eclipsed by more recent traumas. Small steps toward truth cascade into more. Eventually, details begin to emerge.

The truth about famine, for example, had long been known in rough outlines outside China but was known inside the country by only the political elite and a handful of scholars. In recent years, even the government has begun to acknowledge that Mao's policies were partly to blame.

Burma, like China, is a nation where dictatorial rule has become less harsh, though it remains far from truly democratic. And Burma's history has bred generations of pessimists.

After Gen. Ne Win seized control in a 1962 coup it went from being one of Asia's wealthiest nations to one of the world's poorest. Resentment over Ne Win's corrupt and inefficient policies began to grow in 1987 and simmered until Aug. 8, 1988, when a nationwide strike led to widespread protests and quick military repression. A civilian president, named amid the bloodshed, lasted less than a month before being ousted in a Sept. 18 coup.

No government officials have ever been held accountable for the violence, which left an estimated 3,000 people dead.

It was during protests that followed the September coup when Win Zaw, then a doctor at Yangon's main hospital, heard that demonstrators had been shot by soldiers and needed medical help.

Working with an older colleague, Saw Lwin, he repeatedly traveled by ambulance into the protest zone, carrying the injured to the hospital.

On the third trip, as they rounded the corner onto Merchant Road, one of the city's main streets, they saw dozens of dead and injured demonstrators. Blood was everywhere.

The two doctors spotted a young girl, badly injured. Many of the fiercest protesters were students, and the girl was wearing the uniform of a high school student: a dark wraparound longyi and white blouse. The shirt was almost completely red with blood.

"I listened carefully and found that her heart was still beating," Win said. "She whispered, 'Brother, help me.'"

Urging her not to give up, the two doctors ran with 16-year-old Win Maw Oo to the ambulance. That is where Steve Lehman, a 24-year-old American photographer, captured them, their fear and exhaustion obvious, their doctors' coats flapping.

The girl would never see the photograph. She died the same evening.

Weeks later, when the photo appeared on Newsweek's cover, Win Zaw feared there would be trouble. In 1992, he was detained by the military, blindfolded, taken to an interrogation center and held for five days. While he was not tortured, he was deeply shaken by the arrest. He was also blacklisted by the government, and could not get a passport for nearly 20 years. He ended up running a private clinic.

Things went far worse for Saw Lwin. His father, a top executive for the state broadcaster, was forced to retire. Saw, feeling responsible for what happened to his father, grew depressed. In 1996, he killed himself.

Twenty-five years after the crackdown, much remains unspoken in Burma. Thousands disappeared into the country's prisons during military rule, some for many years and often for doing nothing more than distributing leaflets. The torturers of the interrogation centers remain free, as do the jailers and the men who gave them orders.

"If the government recognizes past atrocities and commits to accountability, the anniversary of 8.8.88 could be a pivotal moment in addressing decades of repressive rule," Brad Adams, Asia director for Human Rights Watch, said in a statement. "It could even be the start of a new era if the military and government move from denial to admission and from impunity to justice."

But if activists are calling for investigations, or even a South African-style Truth and Reconciliation Commission, the powerful generals and the government are eager to put history behind them, to welcome the end of sanctions and watch the economy blossom. Tourists now flock to Burma. Trade deals are being signed. And Win Zaw is writing a book.

While he's nervous about going public, he says what happened during those protests needs to be remembered: "8.8.88 should not be forgotten. We have to keep the spirit alive."