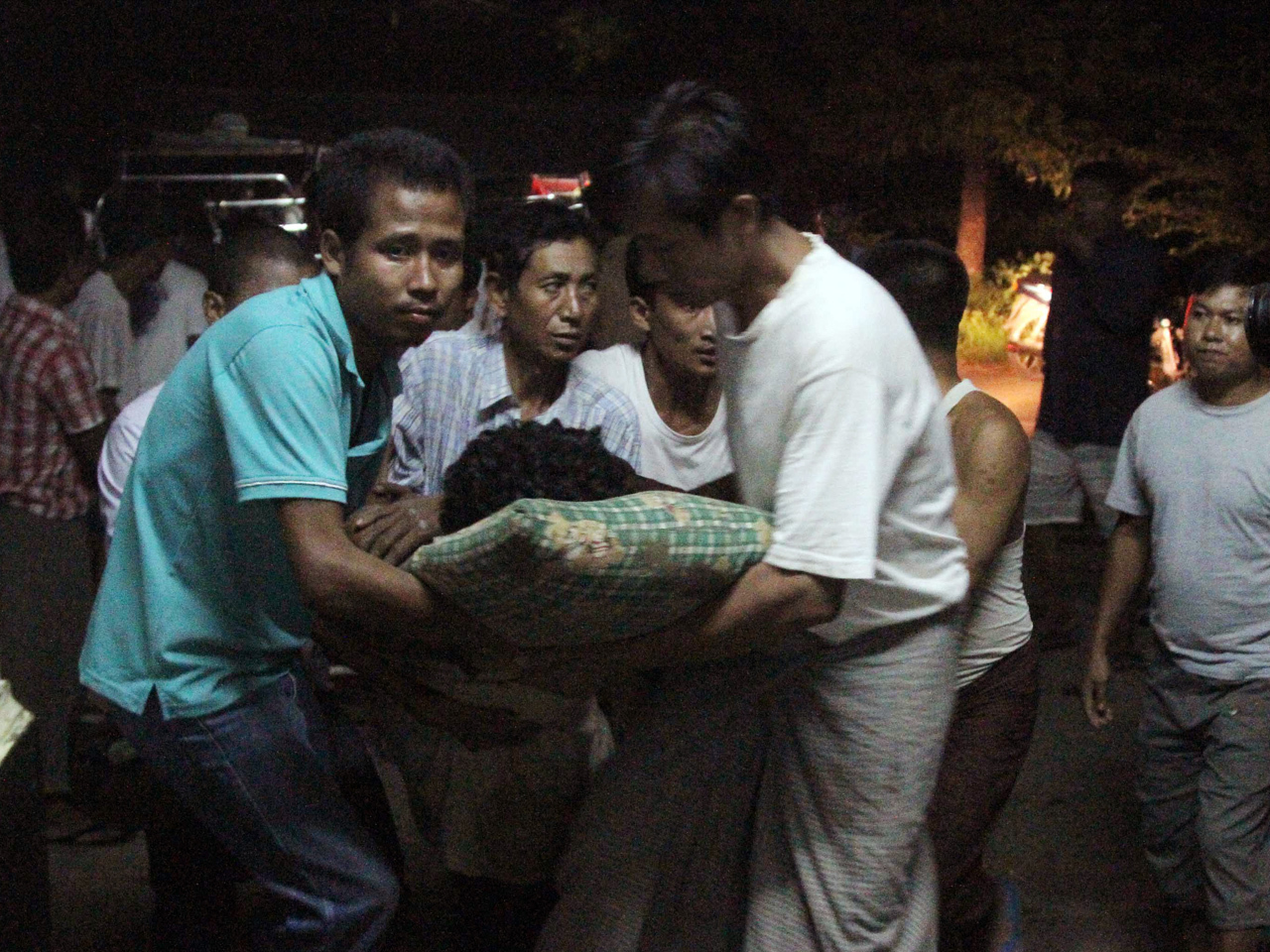 SITTWE, Burma The death toll from recent ethnic violence in Burma's western state of Rakhine has surpassed 100, an official said Friday, as the government warned that the strife risks harming the country's reputation as it seeks to install democratic rule.

Rakhine state spokesman Win Myaing said 112 people had been killed in six townships in clashes that began Sunday between members of the Buddhist Rakhine and the Muslim Rohingya communities. He said 72 people were reported injured, including 10 children.

The government of Burma, which is also known as Myanmar, announced earlier that almost 2,000 homes had been burned down in the conflict.

In June, ethnic violence in the state left at least 90 people dead and destroyed more than 3,000 homes. About 75,000 have been living in refugee camps ever since.

A resident of another township, Ramree, said there also was violence there Friday morning.

"There were some clashes between the two sides in Ramree this morning," Kyaw Win, 30, said by phone.

"Residents are very fearful of imminent attacks by the Muslim community because security presence is very little. We don't feel safe. We want the Bengalis to be moved away from the Rakhine community," Kyaw Win said. Rakhine prefer to use the term Bengali for Rohingya, whom they contend are not a distinct ethnic group.

Kyaw Win said that a few houses had been burned down but that no casualties were reported.

The mob violence has seen entire villages torched and has drawn calls worldwide for government intervention.

"As the international community is closely watching Myanmar's democratic transition, such unrest could tarnish the image of the country," said a statement from the office of President Thein Sein published Friday in the state-run Myanma Ahlin newspaper.

Thein Sein took office as an elected president last year, and has instituted economic and political liberalization after almost half a century of repressive military rule.

"The army, police and authorities in cooperation with local people will try to restore peace and stability and will take legal action against any individual or organization that is trying to instigate the unrest," the statement warned.

The long-brewing conflict is rooted in a dispute over the Muslim residents' origin. Although many Rohingya have lived in Burma for generations, they are widely denigrated as intruders who came from neighboring Bangladesh to steal scarce land.

The U.N. estimates their population in Burma at 800,000. But the government does not count them as one of the country's 135 ethnic groups, and so — like neighboring Bangladesh — denies them citizenship. Human rights groups say racism also plays a role: Many Rohingya, who speak a Bengali dialect and resemble Muslim Bangladeshis, have darker skin and are heavily discriminated against.

A statement issued late Thursday by the office of U.N. Secretary General Ban Ki-moon described the latest violence as "deeply troubling." Ban called on Burmese authorities "to take urgent and effective action to bring under control all cases of lawlessness."

"The vigilante attacks, targeted threats and extremist rhetoric must be stopped," Ban said. "If this is not done, the fabric of social order could be irreparably damaged and the reform and opening up process being currently pursued by the government is likely to be jeopardized."

In Washington, State Department spokeswoman Victoria Nuland said the U.S. was deeply concerned about the reports and urged restraint.

In a hospital in Sittwe, the state capital not yet hit by the latest round of violence, an Associated Press photographer talked to four wounded people brought in from the affected areas. Aung Moe Khaing, 25, was wounded in an arm and a leg, saying he was shot Tuesday when soldiers dispersed the crowd.

Phyu Thein Maung, 39, from Yathetaung township, said he was shot in the buttocks.

"Muslims provoked us from inside their village and challenged us from their community, guarded by soldiers," he said. "People were very angry as they shot iron spikes at us with catapults and made abusive gestures. I was hit by a gunshot when soldiers dispersed the crowd."

There have been concerns in the past that soldiers were failing to protect the Rohingya community, but accounts this time from Rakhine villagers suggest that Burma's military may have been defending the Rohingya.

The crisis has proven a major challenge to Thein Sein's government and to opposition leader and Nobel Peace laureate Aung San Suu Kyi, who has been criticized by some outsiders as failing to speak out strongly against what they see as repression of the Rohingya.

The U.N. warned Thursday that the crisis had sent a new wave of refugees to seek shelter in camps already overcrowded with 75,000 people from the June violence.

Bangladesh has put its border guards on alert, fearing a new influx of Rohingya refugees.

On Thursday, Bangladesh border guards turned away 45 Rohingya trying to enter into Bangladesh by boats, said Lt. Col. Khalequzzaman, a border commander. Local police chief Selim Mohammad Jahangir said Friday that at least another 3,000 Rohingya Muslims had been spotted on about 40 boats on the Naaf River off Bangladesh's Tekhnaf coast.

He said the boats may try to enter Bangladesh, but "we have instructions not to let them come here."

Bangladesh says it's too poor to accept more refugees and feed them. Bangladesh is hosting about 30,000 Rohingya who fled Burma to escape government atrocities in 1991.