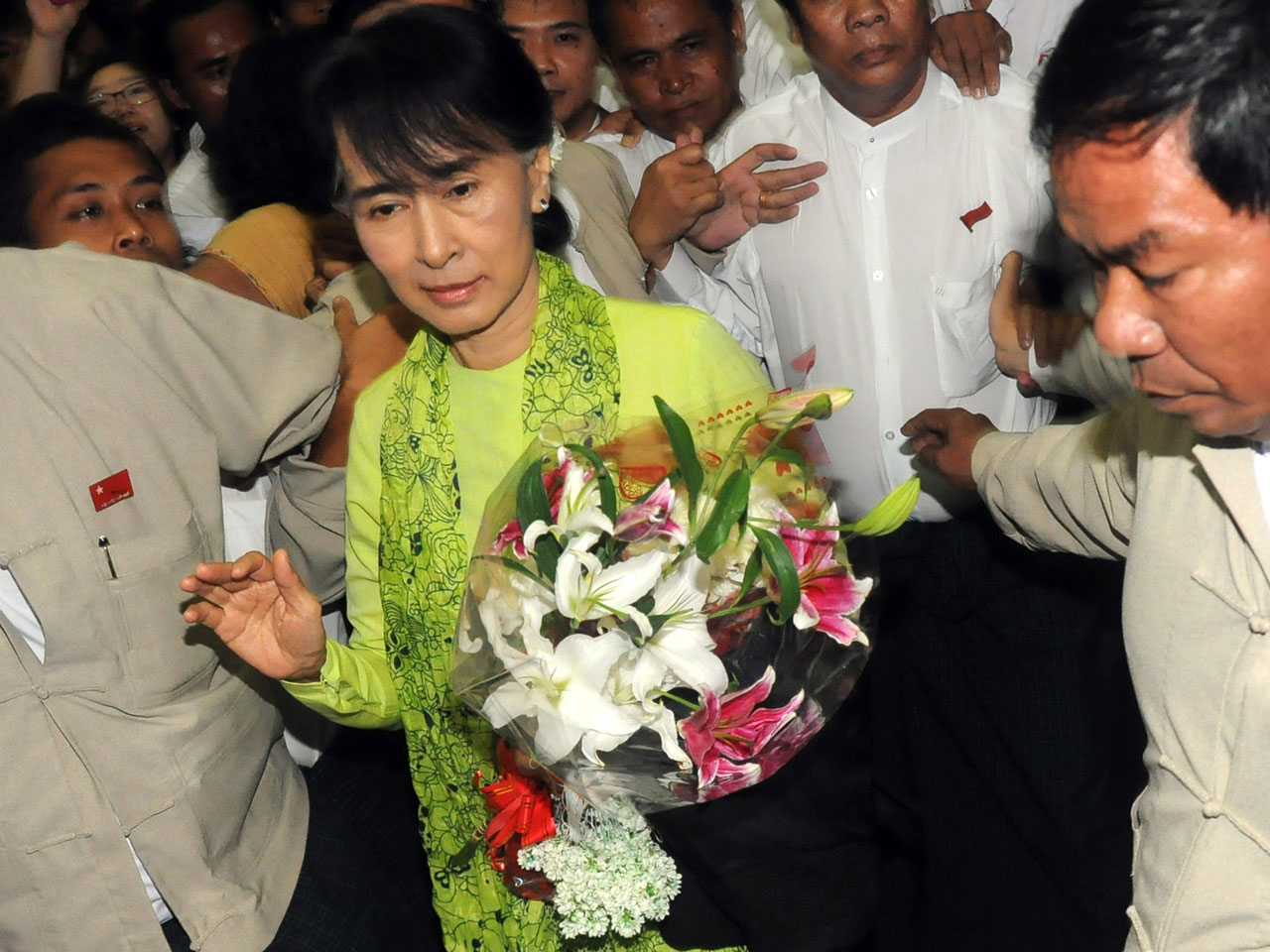 (AP) WASHINGTON - After years of decrying oppression against Burma's democracy leader, the United States got to celebrate her freedom Tuesday as Secretary of State Hillary Rodham Clinton welcomed Aung San Suu Kyi to the State Department at the start of her landmark tour of America.

Nine months after they met at the Nobel laureate's crumbling lakeside villa in Yangon, Suu Kyi and Clinton were expected to discuss the recent political reforms in the country also known as Myanmar and whether Washington should ease its remaining economic sanctions in response.

In brief comments before their meeting, Clinton and Suu Kyi discussed a Burmese expatriate community that she will visit during her 17-day stay. "There's so much excitement and enthusiasm that you can actually come," Clinton said.

Hours before Suu Kyi touched down in Washington, Burma on Monday announced a new round of prisoner releases. According to Suu Kyi's party, at least 87 political detainees were freed, but activists say they are disappointed that hundreds remain behind bars.

State Department spokeswoman Victoria Nuland said Monday the U.S. has yet to identify those freed and declined to comment on whether the U.S. could soon waive its import ban.

Since Suu Kyi herself was freed from house arrest in late 2010, she has transitioned from dissident to parliamentarian. Now confident of her position in Burma and free to travel abroad without being barred from returning, Suu Kyi has in the past four months also visited Thailand and Europe, where she was accorded honors usually reserved for heads of state.

She is also assured of star treatment in the U.S., where she is revered by Democrats and Republicans alike. The ceremonial highlight of Suu Kyi's U.S. visit will come Wednesday, when she is presented Congress' highest award, which she was granted in absentia in 2008 when she was still under house arrest.

She is also likely to be welcomed to the White House, but it has yet to announce whether she will meet President Barack Obama.

The visit is a powerful sign of how a former pariah state has shifted from five decades of repressive military rule, gaining international acceptance. The Obama administration has been at the forefront of the re-engagement that gathered steam when Clinton visited Burma last December. In July, the administration allowed U.S. companies to start investing there again.

"For her to come here and collect the Congressional Gold Medal and celebrate with the activists who have stood by her for so many years is momentous," said Suzanne Nossel, executive director of Amnesty International USA, which will host Suu Kyi on Thursday. The rights group hopes at Suu Kyi visit will help energize a new generation of activists.

But the administration is being careful to balance its plaudits for Suu Kyi with praise and recognition for the former general who has made the reforms possible - President Thein Sein. He arrives in the U.S. next week to attend the U.N. General Assembly's annual gathering of world leaders in New York. Any announcement on easing the import ban is likely to take place at that time.

In a sign of that diplomatic balancing act, a key aide to Thein Sein, minister of the president's office Aung Min, who has been at the forefront of cease-fire negotiations with Burma's ethnic insurgents, will have high-level meetings at the State Department on Wednesday. He will also attend Suu Kyi's Congressional ceremony.

Suu Kyi is under political pressure from Thein Sein's government to press the U.S. to remove the remaining sanctions. It's a step that she appears willing to consider, although many of her longtime supporters in exile oppose it, saying reforms have yet to take root and Burma should not be rewarded at a time when ethnic violence is escalating in some parts of the country.

Fighting in northern Kachin state between the military and ethnic rebels continues and has displaced tens of thousands people. Communal violence in western Rakhine state in June left scores dead, and Suu Kyi herself has faced some criticism for not speaking out in support of the region's downtrodden Rohingya Muslims who are denied citizenship.

Despite her global standing and April election to parliament, Suu Kyi still has little clout in the military-dominated legislature, and rights activists fear that it is military cronies who will benefit most as Burma opens up to foreign investors.

After Washington, she travels later in the week to New York, where she worked from 1969 to 1971 at the United Nations. Suu Kyi will then go to Kentucky to address the University of Louisville, before traveling to meet with one of America's largest Burmese communities in Fort Wayne, Indiana. She will also visit San Francisco and Los Angeles.