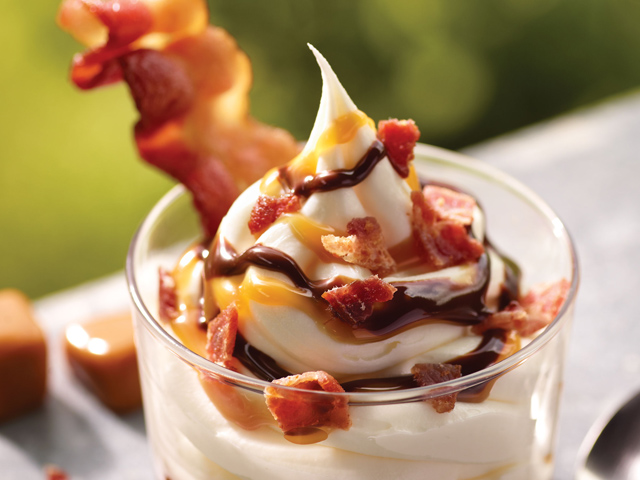 (CBS/AP) NEW YORK - Burger King (BKC) wants to lure customers this summer with a barbecue party - and a bacon sundae.

The world's second biggest hamburger chain on Thursday is launching several pork, beef and chicken sandwiches as limited time offers. And for a sweet ending, the company is also offering a bacon sundae - vanilla soft serve with fudge, caramel, bacon crumbles and a piece of bacon - that started in Nashville, Tenn. earlier this year.

The salty-sweet dessert clocks in at 510 calories, 18 grams of fat and 61 grams of sugar.

The limited-time items are Burger King's latest push to win back customers with a revived menu and reverse sliding market share, an effort that started soon after the company was taken private by the private equity firm 3G Capital in late 2010.

Earlier this year, Burger King launched its biggest-ever menu expansion including fruit smoothies, snack wraps and new salads. The items were intended to go after a broader audience of moms and families, a shift from the chain's previous strategy of courting young men with calorie bombs.

Investing for Life: What is your risk tolerance?

Core menu items, such as French fries and the Whopper, have also been tweaked as part of the company's efforts to improve food quality. Burger King is trying to underscore its own focus on ingredients with a new tag line, "Taste Is King," which replaces "Have It Your Way." A new ad has been celebrating summer barbecues to highlight the chain's emphasis on fire-grilling burgers. The new summer items will be featured in ads starting Thursday.

Wendy's is also revamping its menu to improve ingredients and recast itself as a higher-end burger chain. The makeovers by the hamburger giants come at a time when the traditional fast-food chains are seeing more competition from smaller players such as Five Guys Burgers and Smashburger that offer higher-quality food and alternatives such as Subway.

The items will be available through the summer or while supplies last.