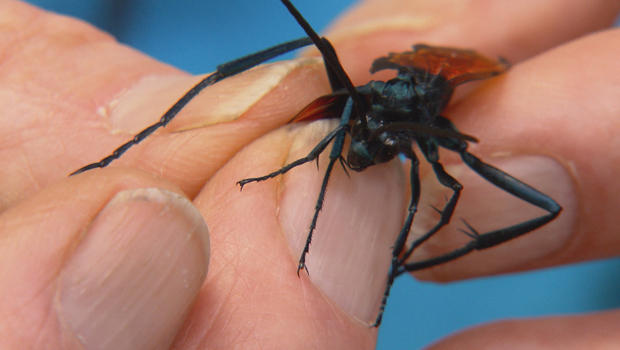 A garden is the perfect place to stop and smell the flowers -- when you're not fending off bugs, that is. Serena Altschul has the buzz:

You could say biologist Justin Schmidt has been bitten by the bug -- actually, a lot of bugs.

Take the honeybee: "They're about as toxic as a rattlesnake," he said. "I kind of make the analogy that if you took a rattlesnake, broke it into 500 pieces and then added wings, you've got honeybees."

He's devoted his life (and his body) to studying insect stings and venoms at his lab in Tucson, Arizona.

Altschul asked, "How many times have you been stung?"

He's been stung so many times, he figured all that pain could be helpful. So he came up with what he calls in his recent book the "Schmidt Scale of Pain." Stings from 84 different insects are rated on a scale from 1 to 4, and accompanied by some imaginative descriptions, like hot pain, itchy pain, burning pain …

"They're quite different, like the tarantula hawk is an electrifying one," Schmidt said. "Feels like you have electric power line break off and land on you."

And he describes the sweat bee as "Light, ephemeral, almost fruity."

Altschul laughed, "What are you talking about?"

And the harvester ants found just outside his front door? They're an excruciating three out of four on his scale.

"This sting to me is one of the more painful of all of them," he said. "It feels like somebody's reaching under your skin and ripping out tendons and muscles."

But Schmidt isn't just studying what the stings feel like; he's also trying understand why insects sting in the first place. "Insects are tiny, tiny little things, and things that want to eat them are big," he said. "So you got this basic problem: How do you defend a little guy, a really little guy, against a really big guy? And the sting turns out to be the solution."

While it may not feel like it to us, most insect stings are purely defensive.

"And if they stung us, they'd say, 'Oh, this is the trouble,' then this stinger is left in your skin. And what it does is it has a little flag on it. And this flag is like a sponge, and it's got chemicals in it."

"But it's communicating back to them some information?" Altschul asked.

"Oh, yeah. That's what it tells 'em. It's an alarm pheromone that says, 'Hey, gals. Get alert. There's bad news. I found the trouble. It's right here.'"

Insects can be a nuisance, to be sure. But there is a silver lining to all that pain. It turns out stings can be useful in finding better ways of dealing with pain itself.

Schmidt said, "One of the projects I'm working on right now is trying to alleviate chronic pain in human beings. You have cancer or many other diseases that have chronic pain. And the solutions we have are very blunt."

So, Schmidt is using the powerful but harmless venom of the fearsome-looking tarantula hawk to better understand how pain works in the body, and ideally help us find ways to treat it more effectively.

"We can now take tissue culture which has the nerves that cause pain, then we say, 'Okay, we can put something that makes the tissue culture indicate pain," he said. "Now we can do the chemistry and pharmacology of, 'What can I put on that tissue that stops it?'"

As far as treating the pain of getting stung by an insect at a summer picnic, he has a tip: "Just salt and a little bit of water, just to make it into kind of a cool paste."

And what does that salt do to a sting?  "We don't know," he replied. "That's one of the fascinating things. It's kind of one of these home remedies."

"But I do get the sneaking suspicion that you love these stinging bugs," Altschul said.

"Oh, absolutely! How can you not adore these? I mean, you look at their life histories. You could see the beauty of what they do, why they do it, how they do it. It's just so fascinating."