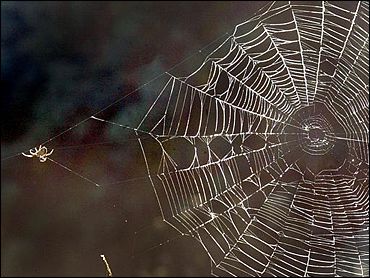 Predatory insects do not have access to the barrage of diet advice thrust at people, but they still manage to vary what they eat to get balanced nutrition, research shows.

"It gives us a new image of small predatory insects and spiders as animals that are very careful about what they eat," said David Mayntz of the University of Oxford in England.

The discovery "shows that predators are not just greedy animals that will eat everything," said Mayntz, lead researcher in the study published in this week's issue of the journal Science.

The researchers studied a type of predatory ground beetle and two types of spiders. Wolf spiders move from place to place and ambush prey; desert spiders build webs and wait for prey.

The predators were fed an unbalanced diet - overabundant in either fats or proteins. Their feeding behavior then was observed when they were offered a choice of foods. All three chose foods that restored the balance of fats and proteins in their diet, the study found.

Mayntz said it has been known that plant-eating insects can balance their nutrients. But, he said, that had not been thought to be a problem for predators because their diet was assumed to be consistent in nutrients.

"Our study is the first to show experimentally that a predator, or a carnivorous animal, can compensate for nutrient imbalances by selecting the nutrients they need," Mayntz said.

He noted that the researchers found that the fat and protein content of fruit flies, a common food of spiders, can vary tremendously, even within the same species.

"Some insect species can have 2-3 percent of lipids, others can have as much lipids as in a sausage, roughly 40 percent," he said in an e-mail.

After their diets were altered, the wolf spiders were offered fruit flies that had been on either a high-fat or high-protein diet.

Because the web spiders depend on what comes to them rather than hunting prey, each spider in the study had one fruit fly placed in its web.

After allowing the spiders to feed on the fly the researchers tested the remains and discovered that the spiders had been able to selectively extract the nutrients they most needed, leaving behind fat or protein they already had in abundance.

In addition to Mayntz, the study involved researchers from Aarhus University in Denmark, University of Auckland, New Zealand and Ben-Gurion University of the Negev, Israel.

The research was funded by the Carlsberg Foundation, the Danish Natural Science Research Council, the British Biotechnology and Biological Sciences Research Council and a Danish government scholarship.