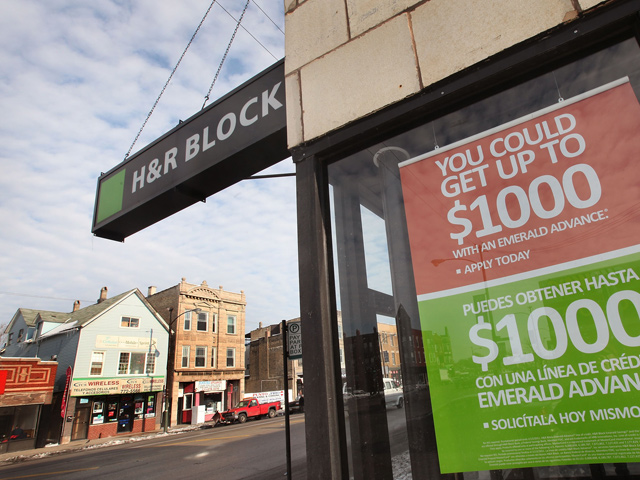 (MoneyWatch) - Federal regulators have been trying for years to stop tax-preparers from offering short-term, high-cost loans that are repaid with the borrower's tax refund. But while only a few tax preparers are offering these so-called refund anticipation loans, which have long been criticized for soaking the poor, some now offer products that do the same thing a different way.

Worse, the regulatory moves that aimed to stamp out the loans have simply made them more expensive. Among the firms still offering these loans are Jackson Hewitt Tax Service and Liberty Tax, two of the nation's largest tax preparation firms. H&R Block, the nation's largest tax preparation firm, exited the refund loan business, but now offers two similar products -- a refund anticipation check, and something called an Emerald Advance.

A refund anticipation check works like this: You get your taxes prepared at H&R Block and sign up for an expedited delivery of your refund. (The IRS promises that if you file electronically, you'll receive this refund in 7 to 14 days.) Block doesn't charge you upfront for return preparation, but takes those fees, plus $34.95 for the "R.A.C." out of your refund, which is sent electronically to you through the tax preparation service. So instead of a loan, with "interest" it's a check, with a "fee." Same result, different means. When Block receives your refund, it either gives you a check -- for an additional $20 fee -- or puts your refund on the company's Emerald Card.

Loading your refund on this debit card costs nothing, but you may be charged additional fees when you use the card. Specifically, if you go to an automated teller to get cash, you'll get charged $2.50, plus any fees charged by a bank that's out of the Block ATM network. It costs $1 to inquire about your balance; and if you don't use the card for three months, there's an "inactivity fee" of $2.50 per month. Using the card at retailers -- including to get cash back -- is free.

Meanwhile, the company's Emerald Advance line of credit is being billed as "part of a suite of year-round products" offered by the company. But, in fact, it was offered for about a month before tax season started in January. In December, for instance, you could apply for an Emerald Advance loan of up to $1,000. Unlike refund anticipation loans, which were secured by the taxpayer's refund, this loan is unsecured. You must qualify based on your income and credit history. If you get the loan, you'll pay a $45 fee, plus an interest rate that's the equivalent of 36% annually. The catch is that you can't have the loan outstanding all year. It must be repaid by Feb. 15.

Bowing to pressure not to provide official "refund anticipation loans," Block's Emerald Advance loan is not offered during tax season.

How is this a "year-round" product when this supposed "line of credit" must be paid in full by Feb. 15? You can keep the card and "reload" it with another high-cost loan after February, if you link it to an Emerald Savings account. In effect, you could have a credit limit on the card that matches the amount you have on deposit -- essentially the same deal you would get with a secured credit card. King says those who keep the card year-round pay a discounted $30 annual fee when the card renews in a year.

Where taxpayers could get refund anticipation loans worth thousands of dollars in past years, assuming they were getting a sufficient refund from the IRS, the maximum refund loan this year is $1,500. That's partly because the IRS is refusing to tell tax preparation firms whether the taxpayer owes other debts, such as back taxes or child support. If the taxpayer owes these debts, the IRS can seize their refunds. The IRS has said that it stopped providing the debt indicator in order to curtail refund loans, which have been widely criticized as being predatory. But John Hewitt, chief executive of Liberty Tax, contends that the change has made the loans riskier and more expensive.

Both Liberty Tax and Jackson Hewitt charge a $61 fee for the refund loan, plus a $49.95 fee to set up a bank account and have refund checks automatically sent to it. Two years ago, when the IRS was still providing information about taxpayer's other debts, a loan of this size would cost roughly $60 total, Hewitt said.

Jackson Hewitt also encourages taxpayers to load their refund checks onto a debit card, pitching that debit cards are cheaper than check-cashing fees for consumers who do not have regular banking relationships. However, the Jackson Hewitt card has substantial fees of its own, including a $5.95 monthly fee and a $2.50 charge for getting cash from an ATM.

Both Liberty Tax and Jackson Hewitt use the same bank, Kentucky-based Republic Bank, to issue the refund loans. The reason: It's the only bank in the country that hasn't stopped -- either voluntarily or under pressure from regulators -- offering the loans. It's worth noting that while consumer groups have long condemned these loans as predatory and regulators frown on them, no federal law bars refund loans, nor the high fees that come with them. Regulators have pressured banks to stop offering them by contending that this type of loan has become "unsafe" now that the IRS won't reveal whether the taxpayers refund could be nabbed to repay other tax debts. Republic is under a supervision agreement with regulators that will prevent it from offering refund anticipation loans after 2012. But don't expect the loans to evaporate next year.

Mark Steber, chief tax officer for Jackson Hewitt, says the company is looking for other ways to provide loans to taxpayers, despite the regulators' concerns.

"As long as there is consumer demand for faster access to tax refunds, we will look to fill that gap," Steber said. "People will find a way to borrow against an asset that's as big as a refund."

Liberty's Hewitt says his firm is already offering the loans through a consumer finance subsidiary in a handful of test markets and expects to be offering loans at roughly the same rate as Republic Bank, in as many as 20 states, by next year. He acknowledges that the loans are extremely high cost, but says people want them -- and may actually need them -- anyway.

"Half the population is living paycheck to paycheck," he says. "When things happen they need money. They could be facing eviction or losing a car or facing late fees on other loans. We aren't offering the loans to convert people to borrowing against their refunds. We're offering them because there is demand."