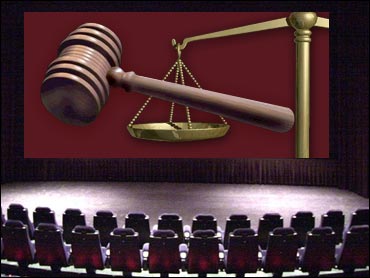 The practice of showing commercials before the start of movies defrauds the public and should be stopped, according to lawsuits filed against two movie theater chains.

The suit accuses the chains of deluging "captive audiences with unannounced and unwanted advertisements."

The on-screen commercials delay the start of movies beyond the posted times, representing a deception against theater-goers, the lawsuits filed Tuesday in Cook County Circuit Court alleged.

Miriam Fisch, who teaches English and film at a suburban Chicago high school, filed one of the lawsuits. She said she recently went to see "The Quiet American" and had to sit through four ads before the movie started.

"It's frustrating when you go to the movies and you expect the movie to begin on time," she said. "It's like a breach of contract."

One of her lawyers, Douglas Litowitz, told the Chicago Tribune the lawsuit also aims to limit "commercial creep." Litowitz said anywhere from four to 10 minutes of commercials usually precede the featured attraction.

"The movie industry went for 100 years without commercials," he said. "Our basic proposition is that if you are forced to watch commercials, you should be compensated for it."

The class-action lawsuits were filed against Classic Cinemas and Loews Cineplex Entertainment. Both ask that theaters state films' actual start times in their ads or pay no more than $75 "for anybody who's had to sit through these things, millions of people," said attorney Mark Weinberg.

Loews, which operates 2,445 screens in 263 theaters, was not available for comment.