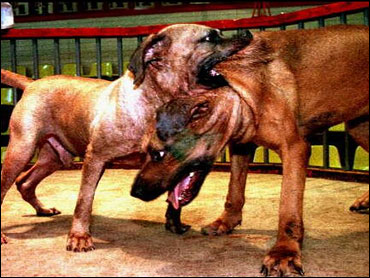 Smith, agreeing to the most lucrative contract ever given a Broncos wide receiver, will be paid $1 million in base salary this year. His salary increases to $4.4 million in 2003, and the deal includes various incentives.

"I talked to Rod initially relative to his progress and what he has done for this organization," Broncos coach Mike Shanahan said. "He has really stepped up to the plate, both during the season and in his offseason workouts, and he's an example of what a pro football player should be like."

"He had two years on his contract, and there was no signing bonus when he first signed. So he was rewarded. As I've said many times, (owner) Pat Bowlen allows me to do some things that only a first-class owner would allow you to do."

"Mike stuck to his word and I appreciate that," Smith, 28, said Thursday. "He took care of me. There's a lot of (Division II) guys out there like me. They just don't get the opportunities. That's the sad thing about it. You have to be lucky, and I've been real fortunate to get a chance to stay with this organization."

"This has nothing to do with money. It's about being happy and being comfortable. It's about people being nice to people. It's real fun to know that you've got everybody in this organization pulling for you."

Meanwhile, there were no developments Thursday in the continuing saga of Gary Zimmerman, the seven-time Pro Bowl offensive tackle who was the target of John Elway's recruiting mission to South Dakota this week in an attempt to talk him out of retirement.

While the Broncos appeared closer to luring Zimmerman back into uniform, there was no confirmation of his intentions. Shanahan said Thursday he still had not been contacted by Zimmerman or his agent.

One published report said Zimmerman had agreed to come back, but Shanahan called that report "very premature."

Zimmerman's wife, Lisa, said her husband told her he hasn't committed to returning. She expected to sit down and discuss the matter with her husband on Sunday, when he returns to their home in Bend, Ore., from a motorcycle rally in Sturgis, S.D.

"I know Gary's not saying `no,' but I also know he hasn't said `yes,"' Lisa Zimmerman said. "He honestly doesn't know. I'm just sorry this is causing such a distraction for the team."