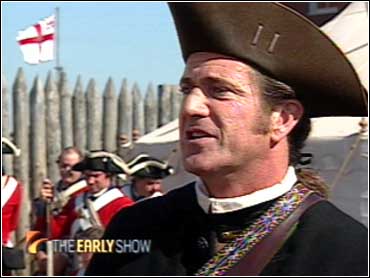 Already smarting from Hollywood's revisionist bent in a succession of quasi-historical films, Britons are demanding a public apology and a retraction from the makers of Mel Gibson's latest blockbuster, The Patriot.

The Revolutionary War saga doesn't open in England until August, but British historians and journalists already have savaged the epic for its flag-waving simplification of events.

"With their own record of killing 12 million American Indians and supporting slavery for four decades after the British abolished it, Americans wish to project their historical guilt onto someone else," historian Andrew Roberts wrote in the Daily Express newspaper.

"Truth is the first casualty in Hollywood's war," The Daily Telegraph chimed in.

The controversy comes on the heels of other questionable film revisions, including Saving Private Ryan, which ignored the D-Day contributions of Britain and other countries, and the recent U-571, which showed Americans capturing a German Enigma coding machine to break Nazi communications. The feat actually was accomplished by the Brits in 1941 -- before the United States entered World War II.

The Patriot, released in the United States in time for the July 4th box-office bonanza, is set during the 1775-1781 American War of Independence. Gibson plays the fictional Benjamin Martin, a reluctant rebel swept into the war when his family is threatened by King George III's nasty British Redcoats.

The film's main villain is the bloodthirsty Col. William Tavington, leader of Britain's Green Dragoons, who in one scene shoots a child and in another rounds up screaming villagers, locks them in a church and torches them alive.

The Liverpool City Council, incensed by what it called the "character assassination" of native son Banestre Tarleton -- a former Liverpool lawmaker and Green Dragoons leader on whom Tavington is based -- has fired off a letter to Columbia Pictures demanding a public apology.

"Hollywood has a habit of taking away the character of notable English people and demonizing them," Liverpool Mayor Edwin Clein said. "We know it happened with Braveheart and it is readily accepted with Titanic. It's annoying this happens when the Americans make a film purporting to be factual."

"Yes, Tarleton was a ruthless soldier," Clein added, "but the film goes a lot farther than that and assassinates his character altogether."

No evidence exists that Tarleton was involved in infanticide or any incidents such as the church arson and murders, said Scott Withrow, historian at South Carolina's Cowpens National Battlefield, where the Redcoats were defeated in 1781.

"As far as I know, it did not happen," said Withrow, though he noted Tarleton had a reputation for brutality. "Somehow the Patriot forces latched onto Tarleton nd used him for propaganda. The Patriot army were masters of this at that time and they built him up as a hated person."

Some U.S. historians and critics, also angered by the loose grip The Patriot shows on the facts, have noted that the church incident closely mirrored an act committed by the Nazis in World War II.

Columbia Pictures has not responded to Liverpool's demand for an apology. Spokesmen for the studio and for Mel Gibson and actor Jason Isaacs -- who portrays Tavington -- did not answer requests for interviews.

But Gibson, already derided by Scottish historians for inaccuracies in the film Braveheart, readily conceded the factually challenged aspect of The Patriot in an interview with London's Sunday Times.

"This is not historically accurate. In the broad strokes, yes -- on other levels, it is sheer fantasy. It's a movie," Gibson said, justifying the fallacies as an educational experience. "It's a good thing that historians are going to harangue this and say, 'It's not accurate.' Good. It'll make somebody pick up a book."