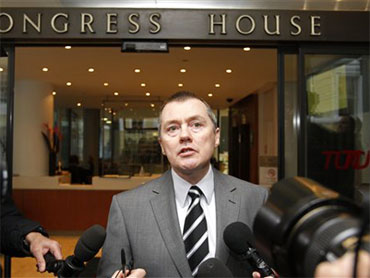 Cabin crews with British Airways are on strike.

The walkout, expected to last three days, has forced the airline to cancel thousands of flights.

A total of 1,100 flights out of the 1,950 flights scheduled to operate during the walkout will be canceled. The airline has leased planes and crew from rival carriers to take up some of the shortfall.

Picket lines will be mounted over the weekend at several entrances to Heathrow.

Talks broke down over a pay freeze and staffing changes.

The Unite union has gathered some support from unions in the United States, Germany and Spain for its action - taken to protest a pay freeze and changes to working conditions - but the other unions have so far stopped short of pledging direct action that would affect BA's ability to refuel and service its planes.

Adam Huberman of Issta, a flight and tour agency specializing in trips to Israel, said he was taking 60 to 80 calls a day from passengers planning to travel to Israel before Passover, which starts March 30.

He said the strike couldn't have come at a worse time.

"It is the busiest time of the year," he said, adding that the agency had put on some flights of its own. "Some will be able to go but fares are obviously higher because it's so last minute."

Among others whose plans were affected were the Cardiff County and Vale of Glamorgan Youth Band from Wales, who are scheduled to play in a wind band festival at Carnegie Hall in New York on Tuesday.

Their scheduled Saturday flight was one of the ones BA has canceled, but after television and radio appeals - and a letter to rival virgin Atlantic - BA managed to get them onto alternative planes.

Picket lines will be mounted over the weekend at several entrances to Heathrow, but Walsh said he had "no concern whatsoever" about the threat of solidarity actions in other countries.

The U.S. International Brotherhood of Teamsters urged travelers to find alternatives during the strike.

"We are keenly aware of British Airways' operations in the United States and the cities served by the airline," the Teamsters, who represent 40,000 workers in the aviation industry, said in a statement. "We continue to look at this situation as it evolves and are keeping our options open."

Walsh said it was "deeply regrettable" that the union declined to accept a proposal on pay and working conditions from the airline.

Unite joint general secretary Tony Woodley said that BA "does not want to negotiate and ultimately wants to go to war with this union."

The prospect of travel chaos in Britain in the run-up to the Easter break also intensified with news that railway signal workers voted in favor of a strike, joining rail maintenance workers. The Rail Maritime and Transport union has not called dates for a walkout of both groups of workers but has refused to rule out the Easter long weekend.

The prospective industrial unrest is an unwelcome turn of events for the ruling Labour Party on the eve of a national election.

Prime Minister Gordon Brown called for the strike to be called off immediately.

"The Prime Minister believes that this strike is in no one's interest and will cause unacceptable inconvenience to passengers," his office said in a statement.

"As the country struggles out of the recession, the last thing we need is the unions holding the country to ransom," said Theresa Villiers, the opposition Conservative Party's transport spokeswoman.

BA argues that the disputed changes - including a pay freeze in 2010, a switch to part-time work for 3,000 staff and a reduction in cabin crew sizes from 15 to 14 on long-haul flights from Heathrow airport - are critical for its survival. Unite argues it was not properly consulted on the changes.

BA said Friday it had offered to modify the changes, even though they had been approved by Britain's High Court, but Unite had declined to put the offer to its members to vote.

Analysts estimate that BA has already lost more than 25 million pounds because of canceled tickets and the cost of contingency plans, which include leasing fully crewed planes from other airlines.

Unite has a second, four-day walkout planned to begin March 27 and has said more strikes will be scheduled for after April 14 if the dispute is not resolved. It has pledged not to walk out over the busy Easter period.