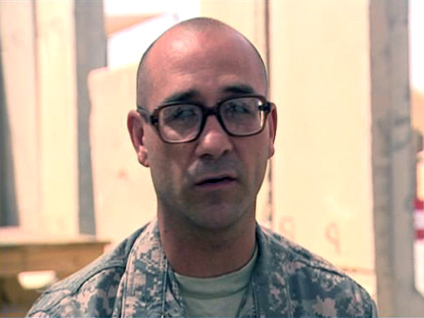 Soldiers don't often talk about what makes them cry - it is not the manly thing to do.

But last week we met Sergeant 1st Class Robert Rish from Powder Springs, Georgia.  He's a hardened soldier with 15 years in the Army, multiple deployments around the world - including three tours in Iraq, and he told us what brought him to tears.

It happened the first time he got back from Iraq, after the initial invasion. Rish flew in to his home base of Fort Polk in Louisiana. Rish, now 36 and has four kids, was met by his family.

First he hugged his wife. Standing behind her was his father, Herb, who had been a combat medic in Vietnam with the 173rd Airborne from 1969 to 1970. Like many Vietnam veterans, Herb returned from an unpopular war to a largely ungrateful nation. Over the years his son had seen some pictures and his father's old uniforms, and had asked him some questions, but hadn't got much in response. But now as the younger Rish returned to the hero's welcome that most Iraq veterans are receiving when they get home (irrespective of what Americans think about the war itself), his father hugged him tight.

"He said, I am proud of you, I am glad you are home safe, and thanks for bringing part of me home too." And that, says Rish, "put me into tears, right there."

Even now, seven years on, Rish finds it hard to describe his feelings back then. "There's obviously a prideful feeling there, but I don't know how to express it, if that makes sense to you. It gives you cold chills, the hair on your arm stands up."

But it has changed Rish's relationship with his father. "Now I would say we have a much more open relationship about pretty much everything, which is really great, really great, because now he does have someone to share that with, if he has issues, or if I have issues, I call him and say, hey, we need to talk."

We spent a couple of days with Rish and 27 other soldiers from Apache troop, 3rd Squadron of the 7th U.S. Cavalry in the small town of Zummar, about 25 miles from the Syrian border in northwestern Iraq. They are there with 21 Iraqi army soldiers and 21 troops from the Kurdish peshmerga armed forces to man a control point on the main road from Syria to the city of Mosul. The road runs right along the front line between Iraqi Arab and Kurdish areas in northern Iraq, and has long been an infiltration route for foreign fighters coming in from Syria.

An IED went off in the town two weeks ago, and Rish's commander, Captain Keith Benoit, received intelligence reports that another attack was planned for the coming days. He led a patrol of American, Iraqi and Kurdish troops through the town's market, and even though the atmospherics seemed pretty good, the soldiers didn't let down their guard.

Most of the soldiers we spoke with were pretty resentful about the idea that combat is over. There are still 50,000 U.S. troops in Iraq. Yes, their main mission is now training and assisting the Iraqi security forces - but every time they step outside the wire with the Iraqis they are assuming the same risks of IEDs and gunshots as before.

Sergeant 1st Class John Sylvester, who was also on the patrol, was forthright: "I can't tell my soldiers you are not a combat-armed soldier any more, that's offensive, you know what I am saying? We are still out here doing what we did before."

We may wish that the war in Iraq was over. The Iraqis, doubtless, want the same thing too. But even though overall levels of violence are way down, there are still insurgents of all stripes out there planning attacks and planting bombs. And so, until the end of their deployment, Apache troop of 3-7 will keep going out on patrol with their Iraqi and Kurdish partners, trying to make sure that the small town of Zummar, population 5,000, remains peaceful.

A Day in the Life: Wardak, Afghanistan

Preaching to the Corps