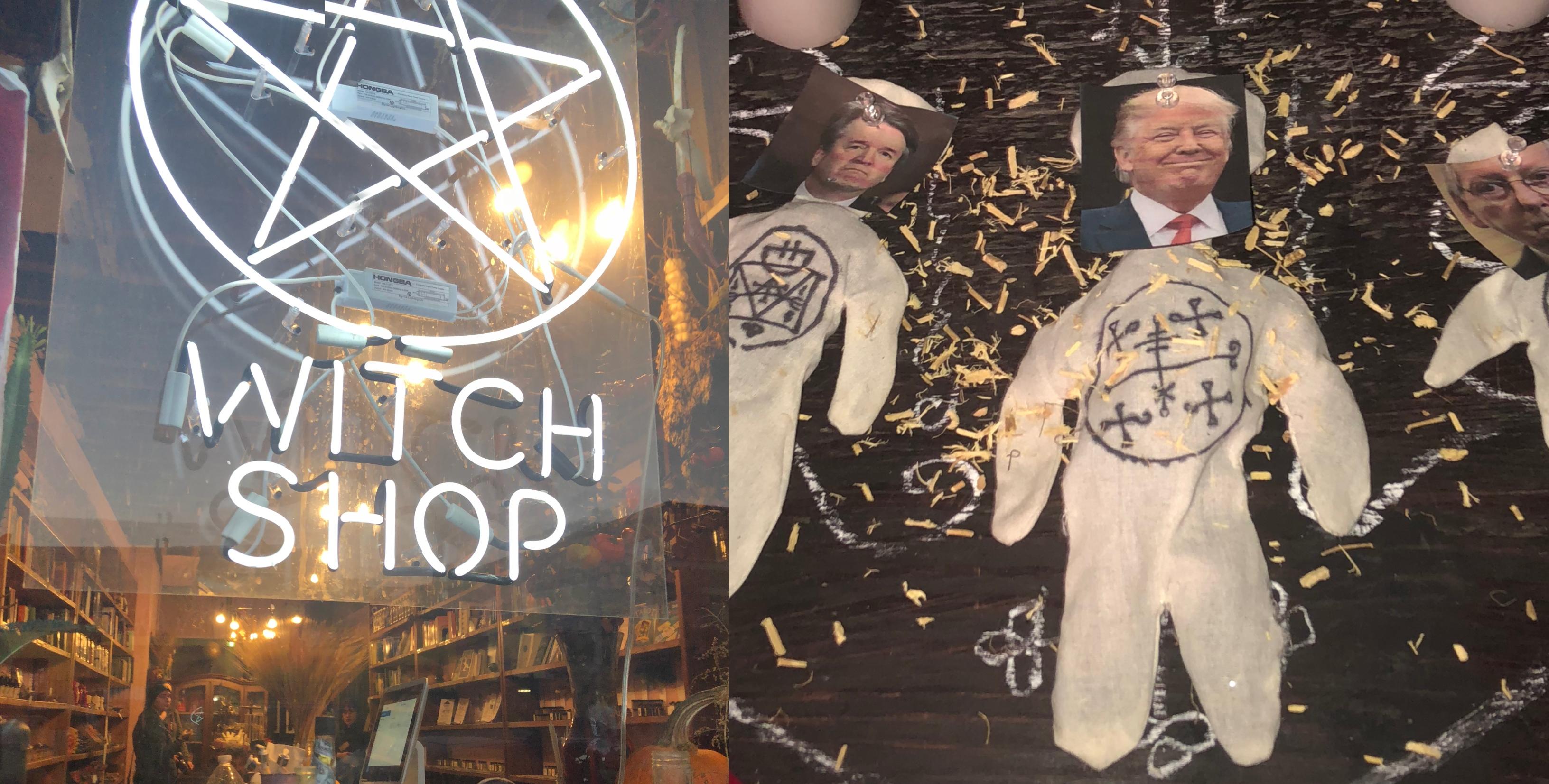 About 60 people met at Catland bookstore in Brooklyn on Saturday to use witchcraft to put a hex on the newest Supreme Court Justice, Brett Kavanaugh.  Dakota Bracciale, co-owner of Catland, said the ceremony was more than just witchcraft, it was a protest. "Yes it's a protest, yes it's a religious ritual. It can be both," Bracciale told CBS News.

The group met inside a dark room with folding chairs, chanted before an altar that was lit with candles, and read Bible passages aloud. On the alter were three "poppets" -- or cloth dolls made to look like real people. Those three people were Kavanaugh, President Trump, and Senate Majority Leader Mitch McConnell.

As Christian music blared, people took turns giving sermons and singing hymns. "I'm not here for Kavanaugh, I'm here for your souls," one counter-protester was heard saying over the loud speaker outside.

"You can do hexes, you can do whatever you want, it's not going to nullify the kingship of Jesus Christ," another person outside was heard saying. The New York Police Department was called to the scene after receiving noise complaints, Bracciale told the group inside before the hexing ceremony started.

During the ceremony, Bracciale instructed the group to chant loudly, so the people outside could hear them. The counter-protesters outside eventually quieted down, as the roughly one and a half hour ceremony occurred inside.

During the first half of the event, attendees were encouraged to sing and chant along with Bracciale, who lead the ceremony. During the second half of the ceremony, Bracciale invited attendees to share their thoughts, their experiences with sexual assault or anything they would like the group to know.

"The takeaway from this was there was a big show of solidarity," Bracciale told CBS News. "There was a really needed catharsis for the people in the room who are struggling with what is going on in our country right now. And that people didn't feel like they're totally alone."

The store owner has been practicing witchcraft their whole life. Many of the attendees, however, did not identify as witches or practice witchcraft regularly. Several expressed their desire to attend the event to protest Kavanaugh's appointment to the Supreme Court after Dr. Christine Blasey Ford testified that he had sexually assaulted her when they were both in high school.

"Everything in politics the past two years has been pretty much nightmare-ish," attendee Reuben Baron told CBS News. "I don't typically attend witchcraft events, but it was good to be here to support people."

"I'm here to harness whatever power we can. Natural, supernatural and voting, to make sure we got fairness represented in government," attendee Jeremy Tjhung told CBS News. Tjhung brought a sign with him that read "I will vote this year."

"I was arrested twice during the Kavanaugh hearings in Washington D.C.," Marie Gustafson told CBS News. "It's really important that we continue this message that this man is abusive to women."

Some counter-protesters lingered until the event ended. Catland Books had escorts on standby, waiting to walk attendees to their cars or subways. The NYPD was also present outside, although they did not appear to intervene. It is unclear how many people waited outside to protest and how many waited outside to spectate.