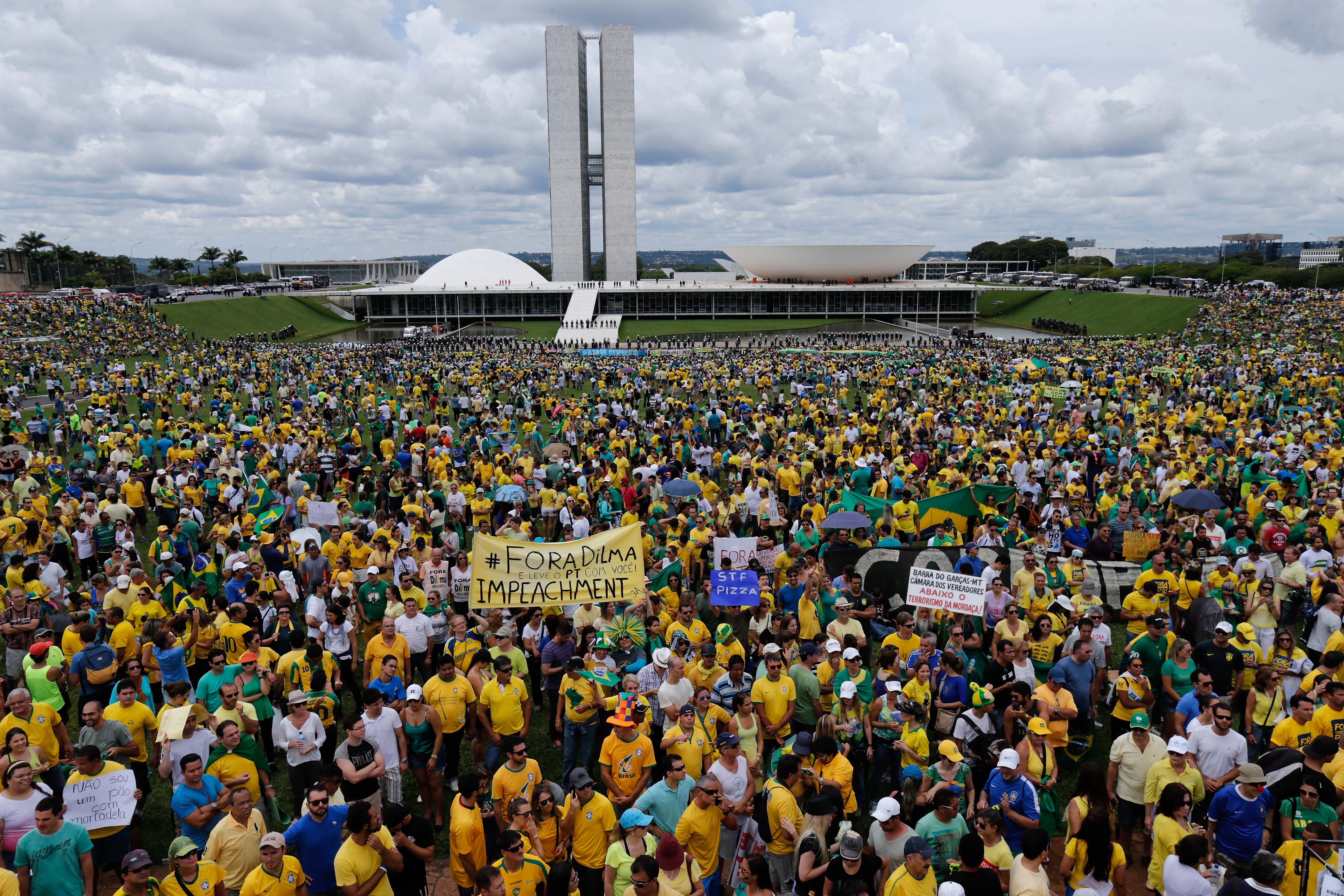 SAO PAULO - Hundreds of thousands of Brazilians marched peacefully Sunday in more than 50 cities around the country to demand President Dilma Rousseff's impeachment and to criticize government corruption amid a sprawling graft inquiry at state-run oil firm Petrobras.

The biggest of the protests, held on the 30th anniversary of Brazil's return to democracy after a long military regime, took place in Sao Paulo, an opposition stronghold where some 210,000 gathered on a main avenue, according to the polling institute Datafolha, one of the only entities in Brazil that makes scientific crowd estimates. Large rallies were also seen in the capital Brasilia, the southern city of Porto Alegre and in Rio de Janeiro.

"We are here to express our indignation with the government-sponsored corruption and thieving, and to demand Dilma's impeachment," said Andre Menezes, 35, protesting on Avenida Paulista in Sao Paulo.

"She may have not been directly involved in the corruption at Petrobras, but she certainly knew about it, and for me that makes her just as guilty and justifies her ouster," he added.

In Rio, police estimated 15,000 people marched along the golden sands of Copacabana beach, where they waved Brazilian flags and many openly called for a military coup to dissolve the government.

"I don't want my country to turn into a Venezuela, we don't want an authoritarian government!" said Marlon Aymes, 35, helping carry a 20-foot long banner that read in English: "Army, Navy and Air Force. Please Save Us Once Again of Communism."

"We want the military to dissolve Congress and call new elections, because the level of corruption is too widespread to do anything else," Aymes added.

In contrast to the widespread violence seen during Brazil's 2013 protests, on Sunday the only conflict reported was police using tear gas and stun grenades to disperse a small group of protesters in Brasilia who authorities said were trying to enter the Congress. In Sao Paulo, police arrested about 20 young men who were carrying powerful fireworks and brass knuckles.

He emphasized that Rousseff would soon propose a series of anti-corruption measures in Congress that were promised during her re-election campaign. He also defended the leader's record as a leftist guerrilla who stood up to Brazil's 1964-85 military regime - and who was jailed for three years and brutally tortured because of it.

Rousseff has said she fully supports peaceful demonstrations, even those demanding her impeachment, and Cardozo added Sunday night that the rallies "confirm that Brazil is a democratic state that allows for divergences, the existence of opposing opinions and that we're far from any coup option."

Much protester ire was focused on a kickback the scheme at Petrobras, which prosecutors call the biggest corruption scandal ever uncovered in Brazil. At least $800 million was paid in bribes and other funds by the nation's biggest construction and engineering firms in exchange for inflated Petrobras contracts.

Top executives are already in jail and the attorney general is investigating dozens of congressmen, along with current and former members of the executive branch, for alleged connections to the scheme that apparently began in 1997 before Rousseff's party took power in 2003. Rousseff, a former chairwoman of Petrobras' board, has not been implicated and so far is not being investigated, though top officials from her administration, including two former chiefs of staff, are caught up in the inquiry.

The marches add pressure on Rousseff, whose poll ratings have never been lower and who is facing duel economic and political crises just three months into her second term. But the protests are significantly different than anti-government demonstrations in 2013. Those earlier protests cut across political, social and economic lines, and were a widespread expression of frustration with poor public services like health care and transportation, as well as a cry against government corruption.

Sunday's protests, largely organized by ad-hoc right-leaning groups over social media, were far more politically focused, and demonstrators mostly came from social classes that voted against Rousseff in her narrow re-election in October.

Despite their partisan nature, the mass marches are another thorn in Rousseff's side. They also add impetus to opposition efforts to thwart measures she backs in Congress, where even those in the ruling Workers' Party coalition are creating hurdles as she tries to push through austerity measures.

Brazilian growth has been weak since Rousseff took office in 2011. The country likely entered a recession in 2014 and most economists surveyed by the Central Bank forecast negative growth this year. Inflation is rising and the local currency has plummeted against the dollar in recent weeks, making life more expensive in a nation with a surprisingly high cost of living and one of the world's heaviest tax burdens.

Still, Brazil's top opposition political figures, including a former president and the top candidates who ran against Rousseff in last year's election, say impeachment is undesirable, because the president isn't accused of any connection to the Petrobras scandal, and because it could affect Brazil's stability.

Pedro Arruda, a political scientist at the Pontifical Catholic University in Sao Paulo, said demonstrators have the right to demand Rousseff's ouster, "but the impeachment they ... demand has no legal foot to stand on."

At Copacabana beach, protester Sheila Alcantara said she was angry she had to recently close a restaurant she owned because of rapidly rising prices for electricity and food.

"Never in my life have I heard of so much corruption, of so much money lost," she said.