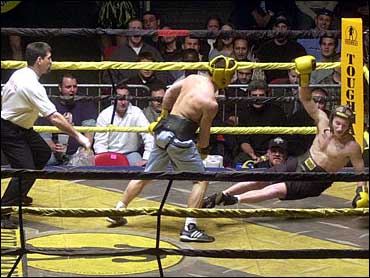 Boxing announcer Mark Beiro has called scores of professional and amateur fights in his career, but he refuses to be ringside at Toughman bouts.

The competitions, pitting inexperienced fighters against each other in unregulated bouts, billed as "brawling for fun," appeal to the "uncaged savage in all of us," he said.

"Toughman loosens about every restriction that boxing currently has and makes it that much more dangerous," said Beiro, one of the nation's best known boxing announcers. "Personally, I am surprised more people haven't been permanently injured or killed in it."

Criticism of the events flared up again last week when a 30-year-old mother of two died after entering a Toughman competition in Sarasota. She was the 10th contestant to die in the 24-year history of Toughman.

In a statement, competition founder and promoter Al Dore denied that the events are dangerous, and he billed them as safer than conventional professional and amateur boxing.

After the woman's death, though, Dore temporarily halted the traveling show.

Sarasota police are investigating whether a crime was committed when Stacy Young, who had never boxed before, was pummeled by a woman who appeared to have more experience fighting.

As the fight wore on, voices in the crowd were yelling for someone to stop it. Young's daughters, ages 12 and 9, were among them. "They are just devastated," said Don Meyers, Young's brother-in-law.

Officials in several states have attacked the fights as not having adequate safeguards.

Referees in Toughman matches are not required to have the same formal training or pass the same strict exams as referees in professional matches or sanctioned amateur bouts.

The only organization that sanctions Toughman competitions, the American Boxing & Athletic Association, is a foundation Dore created and controls.

In a recent series on Toughman, The Detroit News reported that in one deadly match in January, a fighter twice asked to give up but was urged by a referee to continue.

Still, the competitions have been wildly popular. They were portrayed in the 1983 movie "Tough Enough," and are credited with giving a start to the fighting careers of Mr. T and World Super Heavyweight Champion Eric "Butterbean" Esch.

"One of the things they get out of these things are some stories," he said. "Everyone has had playground fights, but not everyone has gotten in the ring."

Veteran Michigan fight doctor Michael Sherbin, former head of the board that regulates boxing in that state, said Toughman competitions are fraught with danger.

"These are big fat guys who are at a bar, they aren't in shape, they can't fight except a street fight," he said of the majority of participants.

Sherbin said the contestants' physical exams are questionable. "The officials don't know what ... they are doing," he said.

Sherbin said untrained physicians can't recognize when a fighter is in trouble - they don't know to look for the glassy eyes, slow legs and lack of defense that indicate a fighter has taken too many blows to the head.

Young was the first woman killed in a Toughman event. Her family's attorney said she never would have agreed to fight if she'd known people had died in previous matches.

Her family said she didn't plan to enter the ring when she went with her husband and daughters to the event at publicly owned Robarts Arena in Sarasota. Her husband, Chuck, took on a fight but lasted less than 30 seconds.

Young was recruited by Toughman organizers because 20-year-old cake baker Sarah Kobie wanted to fight but had no female opponent.

At 240 pounds, Young outweighed her opponent, but Kobie landed several blows to Young's head and knocked her down several times. In the third round, Young suffered a seizure.

Toughman competitions have been banned in five states and in some local jurisdictions. Florida attempted to ban Dore's show in the early 1990s, but left a loophole that allowed him to continue operating.

Boxing announcer Beiro said he thinks most Toughman entrants know the danger, and that's what appeals to them.

"They're the bouncer type, the street-fighter type," he said. "Where they come from, there are even less rules."