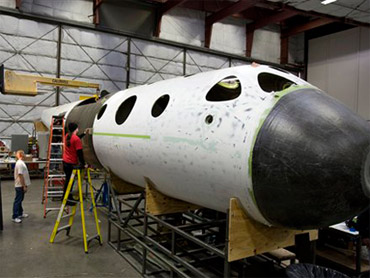 A spacecraft designed to rocket wealthy tourists into space as early as 2011 was unveiled Monday in what backers of the venture hope will signal a new era in aviation history.

The long-awaited glimpse of SpaceShipTwo marks the first public appearance of a commercial passenger spacecraft. The project is bankrolled by Virgin Galactic founder, British billionaire Sir Richard Branson, who partnered with famed aviation designer Burt Rutan, the brains behind the venture.

"We want this program to be a whole new beginning in a commercial era of space travel," Branson said.

Branson is hopeful that they can begin the flights sometime in 2011. Branson said he, his family and Rutan would be the first people to make the trip to space aboard the craft.

SpaceShipTwo is based on Rutan's design of a stubby white prototype called SpaceShipOne. In 2004, SpaceShipOne captured the $10 million Ansari X Prize by becoming the first privately manned craft to reach space.

Since the historic feat, engineers from Rutan's Scaled Composites LLC have been laboring in a Mojave Desert hangar to commercialize the prototype in heavy secrecy. Some 300 clients have paid the ticket price or placed a deposit, according to the company.

"NASA spent billions upon billions of dollars on space travel and has only managed to send 480 people," Branson said. "We're literally hoping to send thousands of people into space over the next couple of years. We want to make sure that we build a spaceship that is 100 percent safe."

The last time there was this level of hoopla in the high desert was a little more than a year ago when Branson and Rutan trotted out to great fanfare the twin-fuselage mothership, White Knight Two, that will ferry SpaceShipTwo to launch altitude.

Despite the hype, hard work lies ahead before space journeys could become as routine as air travel.

Flight testing of White Knight Two has been ongoing for the past year. The first SpaceShipTwo test flights are expected to start next year, with full-fledged space launches to its maximum altitude by or in 2011.

SpaceShipTwo, built from lightweight composite materials and powered by a hybrid rocket motor, is similar to its prototype cousin with three exceptions. It's twice as large, measuring 60 feet long with a roomy cabin about the size of a Falcon 900 executive jet. It also has more windows including overhead portholes. The ship's capacity has doubled with SpaceShipOne designed to carry only three people.

"It's a big and beautiful vehicle," said X Prize founder Peter Diamandis, who has seen SpaceShipTwo during various stages of development.

The ability to view Earth's curvature from space has been limited so far to government astronauts and a handful of wealthy people who have shelled out millions to board Russian rockets to the orbiting international space station.

The debut of the craft could not come sooner for the scores of wannabe astronauts who have forked over part of their disposable income for the chance to float in zero gravity.

"We've all been patiently waiting to see exactly what the vehicle is going to look like," said Peter Cheney, a 63-year-old potential space tourist from Seattle who was among the first to sign up for suborbital space rides marketed by Virgin Galactic.

After SpaceShipOne's history-making flights, many space advocates believed private companies would offer suborbital space joyrides before the end of this decade.

"They've been appropriately cautious and making sure that every step is done correctly," he said.

Tragedy struck in 2007 when an explosion killed three of Rutan's engineers during a routine test of SpaceShipTwo's propellant system. The accident delayed the engine's development.

Virgin Galactic plans to operate commercial spaceflights out of a taxpayer-funded spaceport in New Mexico that is under construction. The 2 1/2 hour trips - up and down flights without circling the Earth - include about five minutes of weightlessness.

SpaceShipTwo will be carried aloft by White Knight Two and released at 50,000 feet. The craft's rocket engine then burns a combination of nitrous oxide and a rubber-based solid fuel to climb more than 65 miles above the Earth's surface.

After reaching the top of its trajectory, it will fall back into the atmosphere and glide to a landing like a normal airplane. Its descent is controlled by "feathering" its wings to maximize aerodynamic drag.

Virgin Galactic expects to spend more than $400 million for a fleet of five commercial spaceships and launch vehicles.

It's not the only player in the ultra-secretive commercial space race. A handful of entrepreneurs including Amazon.com Inc. Chief Executive Jeff Bezos, computer game programmer John Carmack and rocketeer Jeff Greason are building their own suborbital rockets with dreams of flying people out of the atmosphere.