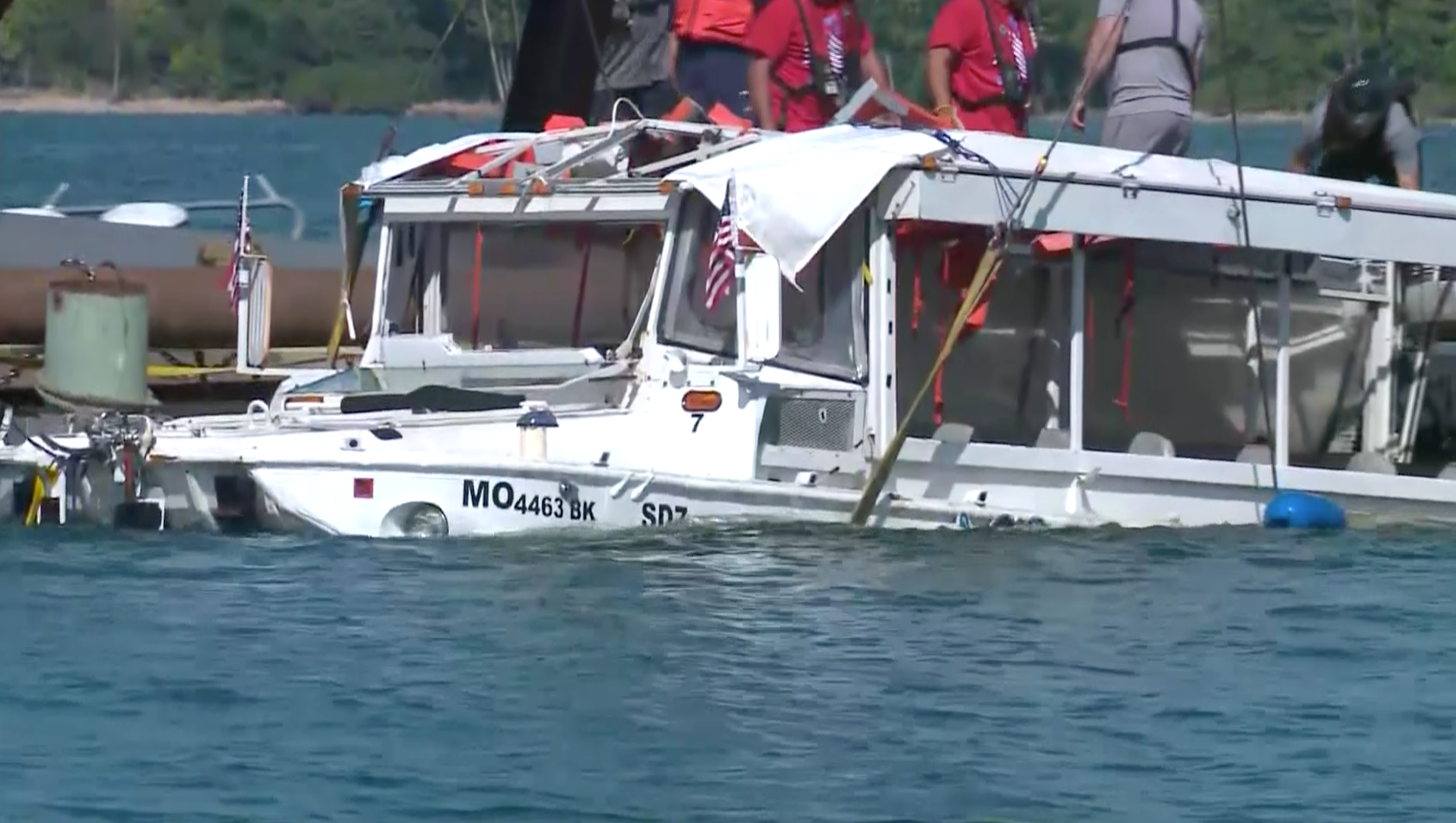 The duck boat that capsized and sank last week on a sightseeing cruise was raised from a Missouri lake Monday, more than three days after the accident that killed 17 people near the tourist town of Branson. Footage from CBS affiliate KMOV showed a crane attached to a barge pulling the duck boat from Table Rock Lake and another boat pushing the vessel toward shore.

The boat, which was submerged in 80 feet of water, went down Thursday evening after a sudden thunderstorm generated near-hurricane strength winds.

Divers attached a sling to the boat, then raised the vessel. Once it was brought to the surface, it was drained, Coast Guard Capt. Scott Stoermer told reporters. The vessel will be loaded onto a vehicle and transported to a facility where the National Transportation Safety Board will take custody of it, Stoermer said.

Loren Smith, 14, was one of the survivors of the accident. She said she managed to swim out of the sinking boat to safety. Her father, Steve Smith, a 53-year-old church deacon, and her 15-year-old brother Lance were among the 17 people who died.

Missouri State Highway Patrol chaplain Steve Martin said the family's survival was "remarkable" and that there is no explanation for it. He said the relatives, who found safety in different ways, were suffering from survivors' guilt.

Divers have recovered a video-recording device that was aboard the boat, although it's unclear whether it was working when the boat capsized or whether any data can be retrieved, including audio. The recorder was headed to the NTSB lab in Washington, D.C.

Steve Paul, owner of the Test Drive Technologies inspection service in the St. Louis area, said he issued a written report in August 2017 for Ripley Entertainment, which owns Ride the Ducks in Branson, after inspecting two dozen boats. In the report, he explained why the vessels' engines -- and pumps that remove water from their hulls -- might fail in inclement weather.

Paul said he would not know if the boat that sank is one that he inspected until it has been recovered from the lake.

Ripley Entertainment, which owns the duck boat business in Branson, has not responded to questions about Paul's concerns.

Ripley has made few comments since Friday, except to say that the accident was the company's first in more than 40 years in Branson.