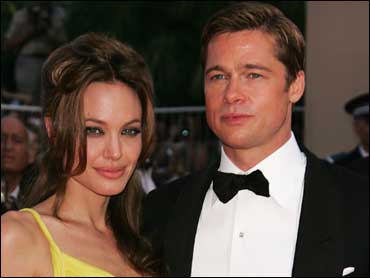 Angelina Jolie says her partner Brad Pitt has a knack for bringing her out of her shell — especially in the bathtub.

"I don't know how he does it, but ... I talk a lot in the bath," she says in the July issue of Marie Claire magazine. For Jolie, it's easier to talk when you're naked. "Get naked with me, and I'll talk!" she says with a laugh.

The mother of four, who is currently filming a new movie in Prague, says it's a beautiful thing to see Pitt interacting with their children.

"I'm so happy for my children — especially Mad," Jolie says. "I didn't know if he was ever going to have a dad. So when I watch them having real strong father-son time, or even when Mad tells me, 'This is a boy thing, Mom' — it's just really beautiful to see."

Jolie's latest film, "A Mighty Heart," about the life and death of journalist Daniel Pearl, recently debuted at the Cannes Film Festival and is really close to her heart she says.

"My work has always been a great way for me to deal with things in my life. Focusing on that story on a daily basis, you certainly don't worry about your life," she says. "I mean, there isn't a better film to make you hyperaware that you should complain about nothing."

2In another interview, Jolie, 32, who won an Oscar for 1999's "Girl, Interrupted," says she wants to be remembered for her humanitarian work, not her acting.

"I have no animosity toward Hollywood or the demands of the red carpet, all that silliness," Jolie tells Esquire magazine in its upcoming July issue. "That's my job, and I'm happy to have it. But when I die, do I want to be remembered as an actress? No."

"I recently had an op-ed (column) published in a newspaper," she continues. "And at the end, it didn't say I was an actress. It said that I was a U.N. goodwill ambassador — that's all. And I was really proud."

An activist for issues ranging from global poverty to wildlife conservation, Jolie says she has found meaning as a citizen of the world.

"I entered this business before I had focus and purpose in my life," says Jolie. "I was very unhappy, very unhealthy, and when I sat down for an interview, I didn't know why. I felt like I didn't have anything to share. It was a very empty time."

3Today, her life is far from empty.

"We don't go to parties. We hardly ever leave the house. We try to schedule time when we're alone," says Jolie, who sports various tattoos, wore a vial of Billy Bob Thornton's blood around her neck during their marriage, and was blamed for Pitt's divorce from Jennifer Aniston — which Pitt has denied.

"Right now, Pax is sleeping in our bed. It's kind of nice, him immediately knowing and feeling comfortable with us," she says. "Madd (Maddox) slept with me until Brad and I got together. They're fun to sleep with. We have family sleep on Sundays. Everybody sleeps together."

"Some people have their lives together and then they have their children," says Jolie. "Brad and I are starting with the children and are planning to have our time together in our later years."