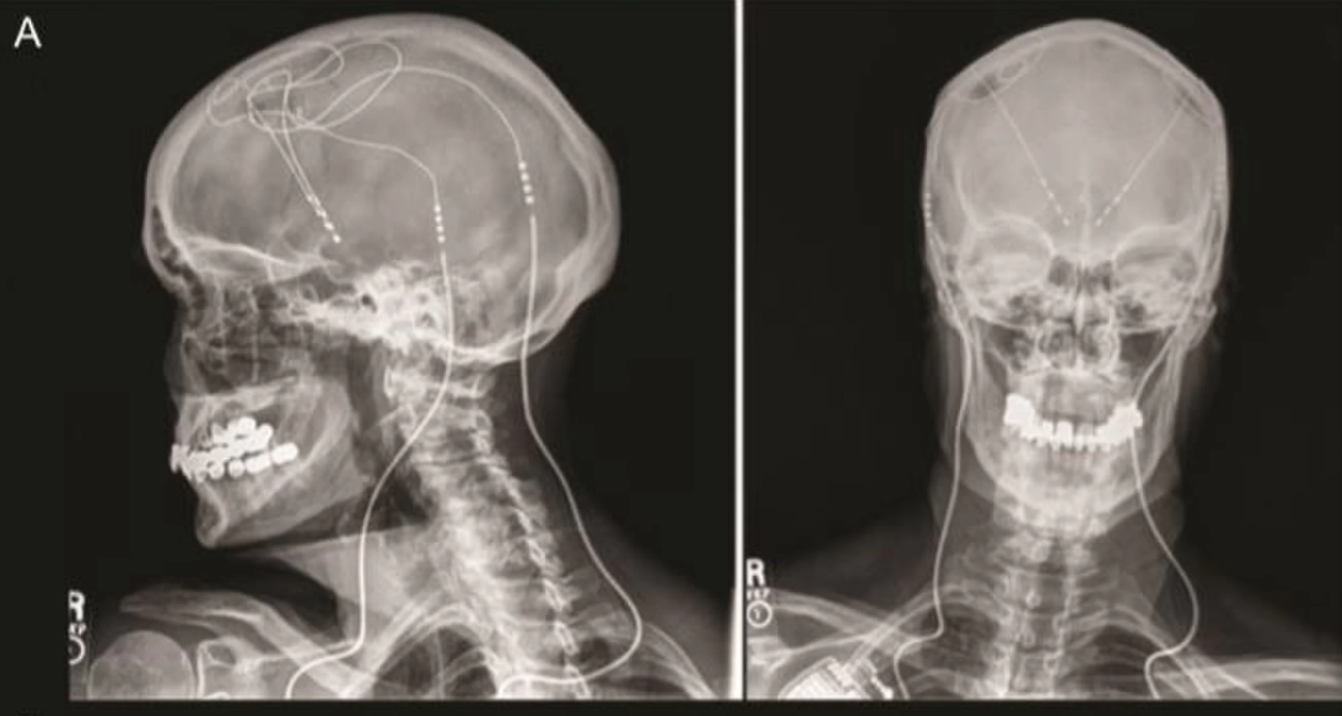 Implanting a pacemaker-like device in the brains of people with Alzheimer's disease could help slow the decline in decision-making and problem-solving skills that's typically seen in these patients, a new study suggests.

The small study involved three patients with Alzheimer's disease who had a deep-brain-stimulation (DBS) device implanted in their frontal lobe — a part of the brain tied to "executive functions," which include planning, problem-solving, attention and judgment. The implant, sometimes called a "brain pacemaker," consists of thin electrical wires connected to a battery pack that sends electrical impulses into the brain.

The study — published online Jan. 30 in the Journal of Alzheimer's Disease — found that after about two years, patients with the DBS implant showed less of a decline in executive functions, compared with a group of similar patients with Alzheimer's who didn't receive implants.

The study is the first to attempt to use deep-brain stimulation to target symptoms related to executive function. Previous studies have used DBS in Alzheimer's patients to target parts of the brain thought to be involved in memory. [6 Big Mysteries of Alzheimer's Disease]

"We have many memory aides, tools and pharmaceutical treatments to help Alzheimer's patients with memory, but we don't have anything to help with improving their judgments, making good decisions, or increasing their ability to selectively focus attention on the task at hand and avoid distractions," co-author of the study Dr. Douglas Scharre, the director of the Division of Cognitive Neurology at Ohio State's Wexner Medical Center's Neurological Institute, said in a statement. "These skills are necessary in performing daily tasks such as making the bed, choosing what to eat and having meaningful socializing with friends and family," Scharre said.

Because the study was small, it will need to be repeated in a much larger group of Alzheimer's patients, said Dr. Michael Schulder, vice chairman of neurosurgery at North Shore University Hospital in Manhasset, New York, who was not involved with the study.

Deep-brain stimulation has been used to treat a number of neurological conditions, including Parkinson's disease, tremors, depression and obsessive-compulsive disorder. It's not clear exactly how DBS works to improve patients' conditions, Schulder said, but it may help block signals that interfere with normal brain function, or it may help brain cells work better. The treatment could also work differently in different parts of the brain, he added.

In the new study, DBS implants were placed in a part of the frontal lobe called the ventral striatum. Participants periodically completed a test intended to measure aspects of cognitive function that are affected by Alzheimer's disease, including executive functioning and the ability to carry out basic daily activities. The participants with the implants were compared to a group of about 100 people with Alzheimer's disease who were around the same age and had similar levels of cognitive impairment, but did not receive DBS.

The researchers found that two of the three patients who received the implants showed significantly less decline in their test scores, compared with the participants who didn't receive the implants. One of the DBS participants, 85-year-old LaVonne Moore of Delaware, Ohio, even showed some improvement in her daily activities. For example, when Moore started the study in 2013, she wasn't preparing her own meals. But after two years with the implant, she could  cook a simple meal, the researchers said.

In the future, the researchers want to explore using nonsurgical methods to stimulate the frontal lobe in Alzheimer's patients, which would be a less invasive treatment than the surgery required for DBS.

Schulder said that DBS treatments "would only be one small part of the puzzle" in treating Alzheimer's. Ultimately, tackling Alzheimer's will require multiple components, including preventive measures and medications, as well as approaches such as surgically implanted devices that stimulate multiple parts of the brain, he said.