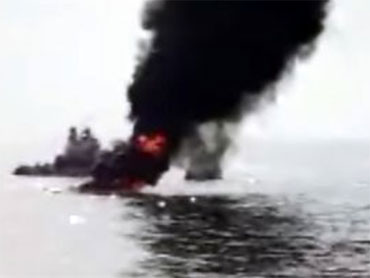 The owner and operator of the Gulf of Mexico oil rig at the center of a massive oil spill that threatens to become the worst U.S. environmental disaster in decades are being accused of negligence in a class action lawsuit.

The suit, filed by Acy J. Cooper Jr., and Ronnie Louis Anderson - two commercial shrimpers - on behalf of Louisiana residents affected by the spill, seeks at least $5 million from British Petroleum PLC, which operated the rig, and Transocean Ltd., the rig's owner.

According to the suit, the defendants failed to properly operate the rig, the Deepwater Horizon, failed to hire or train qualified personnel and didn't respond to the accident effectively enough.

In an interview with Reuters, BP CEO Tony Hayward said the company would compensate those affected by the spill.

"We are taking full responsibility for the spill and we will clean it up and where people can present legitimate claims for damages we will honor them. We are going to be very, very aggressive in all of that."

Louisiana fishing industry may sustain $2.5 billion in losses and Florida may lose $3 billion in lost tourism, Neil McMahon, an analyst at investment firm Bernstein said Friday, according to Reuters.

About 210,000 gallons of oil are spewing out daily from an underwater well drilled by the rig, which exploded in flames April 20 and sank two days later.

The leak from the ocean floor proved to be far bigger than initially reported and may eclipse the Exxon Valdez disaster, which poured 11 million gallons of oil into Alaska's Prince William Sound in 1989.

The Coast Guard has been working with BP to deploy floating booms, skimmers and chemical dispersants, and set controlled fires to burn the oil off the water's surface.

Halliburton Energy Services Inc., and Cameron International Corp. are also named as co-defendants in the complaint. The suit claims Halliburton improperly cemented the well and well cap, which contributed to the explosion and subsequent spill. Cameron allegedly supplied the blow-out preventers which should have kicked into operation and prevented the oil spill.

A Cameron spokesman declined to comment on the suit, citing company policy. Attempts to reach the other co-defendants have been unsuccessful.

Kennedy & Madonna LLP, the law firm of Robert F. Kennedy, Jr., is one of the firms involved in bringing the suit.