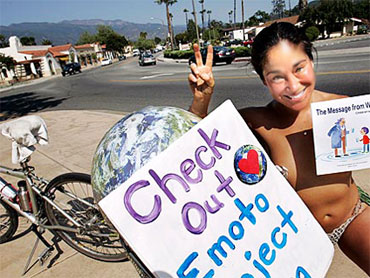 A decade ago, 7-year-old Nicholas Green was shot to death while his family was vacationing in Italy, Kaufman says.

It wasn't until they got to a hospital that they learned Nicholas had been shot in the head during an attempted robbery.

Two days later, he was declared brain dead. The Greens could have returned home, bitter at the country where violence took their son's life. Instead, they offered the Italians a precious gift.

"We asked them if it was possible to donate his organs," says his mother, Maggie. At that time, organ donation was practically unheard of in Italy.

The whole nation seemed to erupt in emotion.

Nicholas Green was embraced as a hero, and a decade later they're still saying thank you.

Ten years ago Maria Pia Pedala was about to die of liver disease. Today, she's a mom with two children. She named her son Nicholas.

"My life was broken at 19. With the transplant I have had a life," she says. "I go out when its getting dark, I say to my son, 'See Nicholas, that star high above that shining the most bright, that's Nicholas.'"

Nicholas' father Reg has returned to Italy many times to visit Maria and the other recipients of his son's organs.

All seven recipients are alive and doing well.

"It's very gratifying. You know the thought that just one simple decision can have these effects which reverberate from generation to generation," says Reg Green.

"What does help is that sense that Nicholas' death brought life to other people. In Italy alone, organ donation rates have almost tripled since Nicholas was killed."

Nicolas' sister Eleanor remembers him as a "bratty older brother who wouldn't let me play Robin Hood with him."

Eleanor was not hurt in the attack, but she learned how fragile life can be, so she's extra kind to the twins who were born to the family after Nicholas' death.

"I always resented my brother for not being there when I wanted to play with him. So now I try and take my time and be with my brother and sister in case something bad happens to them or me," says Eleanor.

In Italy, streets and schools carry Nicholas Green's name. By some estimates, thousands of have been lives saved because he put a face on the importance of organ donation.

"Every day we get letters and e-mails and phone calls from complete strangers whose views and behavior is being affected by this story," says Reg Green. "After all, it's a very small tragedy by the world's standards and by now, should have largely been forgotten. But he lives for a lot of people."

And a lot of people live because of him.

Reg Green has returned to Italy more than 30 times to promote organ donation.

Here at home, he regularly travels the country to speak about giving the gift of life.

On Oct. 23 and 24, a relay race will be held in northern California and dedicated to Nicholas.

Click here to find out about Nicholas Green Foundation.