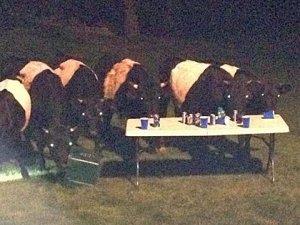 (CBS) BOXFORD, Mass. - Boxford, Massachusetts is a quiet suburban town of about 8,000 people north of Boston - not exactly a one-horse town - maybe more of a "six cow town."

That's how many cattle crashed a backyard party Sunday night and started drinking the beer, police said, according to CBS Boston.

Police Chief Michael Murphy passed along pictures from the incident that began when officers were called to Main Street for an animal complaint. According to a report, officers said about a dozen young adults - as in people - had been drinking beer at a picnic table when the cows showed up.

"I could hear them [the partygoers] screaming in the backyard and I hoped they weren't getting trampled," Lt. James Riter told WickedLocal Boxford.

The cows then all decided to enjoy a couple of cold ones - beer that the frightened, but unharmed partygoers left behind.

"I saw one cow drinking the beer on its way down as it spilled off the table," Lt. Riter reportedly said. "Some of the cows were also picking through the empties in the recycling bin... They just went in and helped themselves."

CBS Boston reports the cows' owner eventually showed up and helped herd them back to his field.

Bet they didn't walk in a straight line.