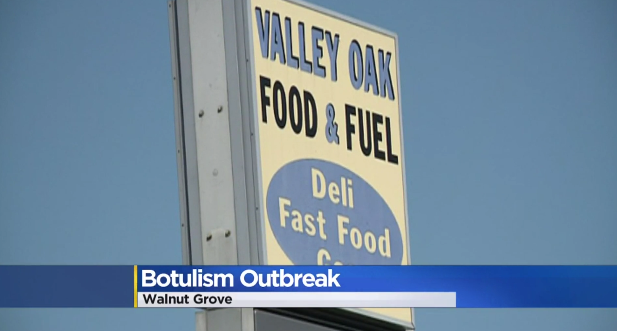 Sacramento County Public Health officials have issued a health warning about a botulism outbreak that's sent five people to the hospital. All five are in serious condition linked to the rare and potentially fatal type of food poisoning, CBS Sacramento reports.

Officials are still investigating the exact cause of the outbreak, but they believe people got sick after eating prepared foods, including such items as pre-packed sandwiches, dairy products and other snacks from a local gas station in Walnut Grove.

A red warning sign from the county is posted on the door to Valley Oak Food and Fuel to warn customers. Inside, part of the store is roped off to keep customers away from buying food items.

"Botulism is a very serious disease. We are calling it an outbreak because botulism is rare," explained Dr. Oliva Kasirye, a public health officer.

Dr. Kasirye says there are usually just a few cases of botulism reported in Sacramento County each year. So five people getting sick within a two-week period makes this outbreak a "serious concern," she said.

In severe cases, botulism can lead to muscle paralysis and respiratory failure, and can be fatal.

"The thing that we are concerned about is if it impacts the muscles that control your breathing… someone can go into respiratory arrest. So it's really important for someone to seek care immediately," Kasirye said.

Other symptoms may include blurry or double vision, slurred speech and muscle weakness. The CDC says symptoms typically develop between 12-36 hours after eating contaminated food. Health officials say botulism, which results from a nerve toxin produced by bacteria, is not spread from person to person.

Health officials warn that anyone who may have bought food from Valley Oak Food and Fuel and are showing signs of getting sick should to call their doctor immediately.

The health department's ongoing investigation will include looking into how the gas station prepares and handles its food, as well as tracing any possible contamination from the food distributors it uses.