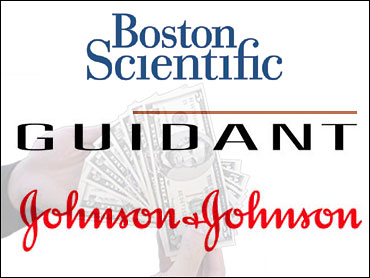 Guidant Corp. agreed Wednesday to be acquired by Boston Scientific Corp. for about $27.2 billion in cash and stock, ending a nearly two-month bidding war against Johnson & Johnson for the heart device maker.

Natick, Mass.-based Boston Scientific and J&J have been competing to buy Guidant since early December, hoping for a stake in the fast-growing $10.3 billion cardiac rhythm management market.

"We believe the transaction and the strategic rationale for this combination are in the best interests of our patients, employees, customers and shareholders — reflecting the full value of our firm," Jim Cornelius, chief executive at the Indianapolis-based Guidant, said in a statement. "The combination of these two companies provides faster, more consistent revenue growth opportunities to shareholders."

Last week, Guidant's board said Boston Scientific's $80-per-share offer was favorable to a lower, $71-per-share offer from J&J. A five-day period for J&J to sweeten its $24.2 billion bid expired at midnight.

New Brunswick, N.J.-based J&J acknowledged Wednesday that Guidant had terminated their agreement. It said that topping its last offer would not have been in the best interest of its shareholders.

The Boston Scientific acquisition of Guidant must be approved by federal regulators as well as shareholders at each company. Boston Scientific officials said they expect the deal to close in the first quarter.

"We are excited about combining the talent and experience of Boston Scientific and Guidant employees," Jim Tobin, Boston Scientific's president and chief executive, said in a statement. "We look forward to working with Guidant to complete the transaction quickly and to creating a global leader in cardiovascular devices."

The combined companies could have 2006 revenue of nearly $9 billion.

It will also pay J&J a $705 million break-up fee owed by Guidant for ending its earlier agreement with J&J.

J&J had originally offered $25.4 billion for Guidant in December 2004 but started to express second thoughts following a series of Guidant product recalls last summer. Guidant sued to close the deal and the companies agreed to a revised J&J offer of $21.5 billion in November.

In December 2005, Boston Scientific entered the picture and offered $25 billion for Guidant, triggering a bidding war.

Most big employers say they are mandating COVID-19 vaccines