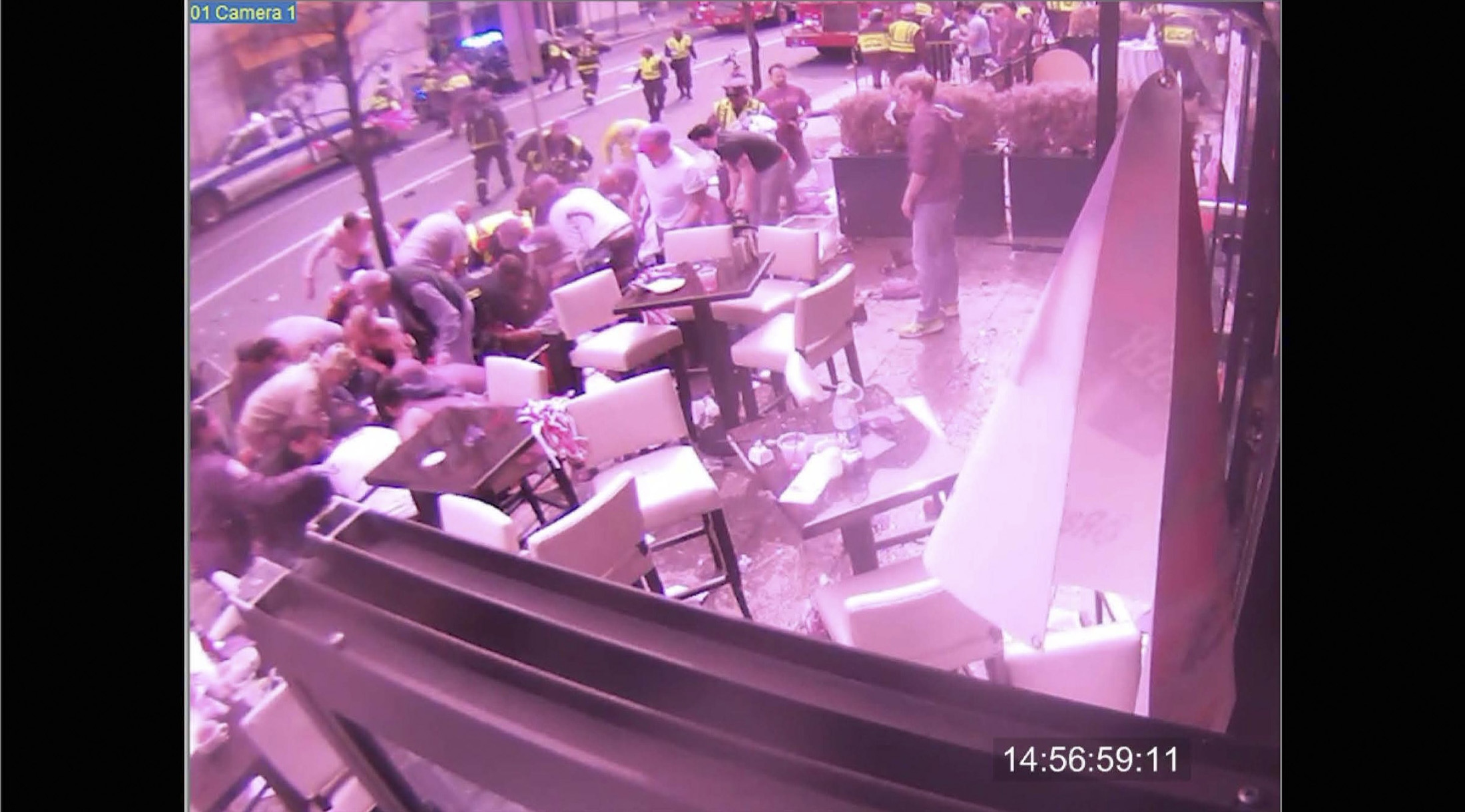 BOSTON -- A woman testifying from her wheelchair Monday in the Boston Marathon bombing trial recalled shielding her husband from the sight of his mangled leg, being pushed to the ground as a bystander frantically tried to extinguish the flames on her body and coming to grips with becoming a double amputee.

Jessica Kensky said that she and her husband each lost a left leg in the attack and that she eventually had to have her other leg amputated as well.

"I did not want to become a bilateral amputee," Kensky said. "I wanted to paint my toenails. I wanted to put my feet in the sand, and I wanted to do all these things. To lose the second leg was a gut-wrenching, devastating decision."

Kensky testified at the federal death penalty trial of bomber Dzhokhar Tsarnaev, whose own lawyers have acknowledged his involvement but said he was influenced by his other brother, Tamerlan, who was killed in a getaway attempt days after the bombings.

In the first two days of testimony, prosecutors called more than a dozen witnesses, including several marathon spectators who described losing limbs. About two dozen survivors, friends and family members were in the courtroom Monday.

Last week, Tsarnaev showed no reaction to the vivid and powerful stories delivered just feet in front of him, but jurors and spectators in the courtroom found it painful to hear. In many cases, they were brought to tears, reported CBS News correspondent Elaine Quijano.

Three people died and more than 260 others were injured when twin bombs exploded at the finish line of the 2013 Boston Marathon.

Less than 30 minutes later, Tarnaev calmly walked into a Whole Foods store in Cambridge and bought a half-gallon of milk. The jury was shown store surveillance video of him making the purchase.

Jurors also watched a timeline video compiled by the FBI using surveillance video from stores and restaurants near the marathon finish line. The video, which shows both brothers' movements around the time of the bombings, focuses on Dzhokhar and shows him carrying a backpack up until he gets to the front of the a restaurant, when he is shown dropping the bag from his shoulder.

One frame then shows the backpack at his feet. The backpack is in a crowd of people and right near children standing on a metal barrier, including 8-year-old Martin Richard, who was killed, and his younger sister, Jane, who lost a leg in the blast.

As the first bomb explodes, the video shows everyone in the crowd turning toward the blast. Tsarnaev does not look in that direction and instead begins to walk in the other direction.

Seconds later, the second bomb explodes, and Tsarnaev, who prosecutors say detonated the second bomb, is seen running with a crowd of people who are also running. People are also shown jumping over metal barriers as smoke wafts over the scene.

Prosecutors showed jurors tweets from what they identified as two accounts of Dzhokhar Tsarnaev.

"If you have the knowledge and the inspiration all that's left is to take action," he tweeted April 7, a little over a week before the bombings.

"I want the highest levels of Jannah," he tweeted March 10, referring to the Islamic concept of paradise. "I want to be able to see allah every single day for that is the best of pleasures."

Kensky told jurors that chaos erupted after the blasts and that she remembers trying to prevent her husband from seeing his leg. She said she didn't know she was on fire until a man shoved her down and began trying to put out the flames.

When she arrived at the hospital, she heard the voices of other bombing survivors.

She didn't realize the extent of her injuries immediately because the front of her legs looked intact.

"At one point, they rolled me over and that's when I could tell that things were really bad, just by the looks on their faces," she said.

Her left leg was removed below the knee during surgery, and doctors attempted to reconstruct her right leg.

But after seeing specialists around the country and having multiple surgeries over more than 18 months, Kensky had surgery to amputate her right leg this January.

For Rebekah Gregory, testifying provided a form of relief. She lay on the pavement in agony after the second bomb exploded, leaving her with a devastating injury to her left leg.

"Right before I walked in, I was dreading it," Gregory said.

The 27-year-old posted an open letter to Tsarnaev on Facebook. "I have been truly scared of you and because of this, fearful of everything else people might be capable of," she wrote.

"When I walked into the courtroom and I was able to look him in the face, I realized that that fear was gone. And I wasn't afraid. And he became a nobody to me again," Gregory said.

Also testifying Monday was a woman whose close friend died in the attacks.

"What happened?" Zhou recalled Lu asking. "What should we do?"

Zhou thought it was a sewer explosion. But seconds later, the second bomb exploded.

Zhou said she looked in front of her and saw a man whose legs had been blown off. She said when she looked at Lu, she thought she would be OK because she seemed to still have her arms and legs.

She found out later in the hospital that Lu had died.