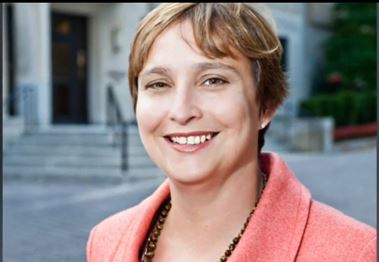 BOSTON -- The headmaster of of a prestigious Boston high school has announced she will resign at the end of the school year after a race scandal rocked the institution, Boston Public Schools confirmed Tuesday afternoon.

Headmaster Lynne Mooney Teta has been the subject of a federal investigation over her handling of reported racial tensions among students, reports CBS Boston.

Boston Latin School is the nation's oldest public school, having been founded on April 23, 1635.

"We have faced challenges this year, and I have been greatly encouraged by the commitment of students, faculty, families and alumni to work together to collaboratively address issues of racism and discrimination in our community," she wrote in a letter to the Boston Latin School community on Tuesday.

"Over the nine years of my tenure as head master, we have built the foundation to create a more welcoming and inclusive school environment," she wrote. "There is still more work that needs to be done."

The group had reported the incident to the headmaster and launched a social media campaign to tell the world they were unhappy with the response.

Later that month, Boston Mayor Marty Walsh called for an investigation into the allegations. In March, a federal investigation was opened.

A school district investigation report says the school failed to adequately respond to a student's threat to lynch a 15-year-old black classmate.

Superintendent Tommy Chang accepted Teta's resignation on Tuesday and said he will launch a nationwide search for the next headmaster.

"I will work with Superintendent Chang to identify the next BLS headmaster to carry on the school's tradition of academic excellence, while creating a welcoming environment for all," Boston Mayor Marty Walsh said in a public statement.

Kevin Peterson of the New Democracy Coalition was one of those who called for Teta's resignation, though he says the news makes him sad.

"The headmaster seems fairly competent but she mishandled this particular issue," Peterson said.

Peterson believes new leadership will be good for the school and it presents an opportunity for the city to regroup. He looks forward to developing a "comprehensive policy that addresses the issue of racial equity and fairness across the Boston Public School system."

Superintendent Tommy Chang said in a statement that Teta guided students and faculty in creating a more welcoming environment after the allegations surfaced.