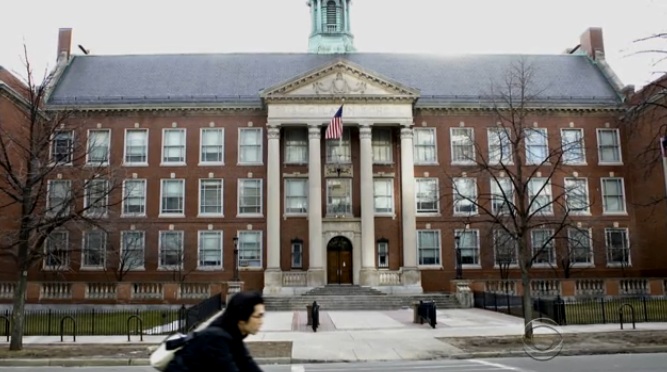 BOSTON -- A Boston high school known for being at the center of diversity and progressive politics is now the center of a controversy -- after students began a social media campaign alleging racial incidents on campus.

When Meggie Noel and Kylie Webster-Cazeau created a YouTube video their goal was to draw attention to allegations of racism at their elite school -- Boston Latin -- which they say have been ignored.

The students claim underlying racial tensions in the hallways and online ramped up when Ferguson police officer Darren Wilson was not indicted in the shooting death of Michael Brown.

"It made students of color feel really uncomfortable that students who they sit next to in class, who they see in the hallway, whose locker is (near) said these things and thought these things," said Webster-Cazeau.

Among their claims, they say school officials did not reprimand students who openly used racial slurs at school.

Using the hashtag #BlackAtBLS -- they're now encouraging other students to join the conversation.

The YouTube video has now gone viral and the discussion is expanding.

"The experiences that kids have in our schools shouldn't be racism," he said.

The district is now investigating.

Boston Latin is the oldest public school in the country and is considered a top feeder school for the Ivy League, with a long list of prestigious graduates.

Twenty-two years ago, roughly 23 percent of the student body was black. Today, African-American students make up less than nine perfect.

"Whatever happens, we are definitely going to holding administration accountable, holding BPS accountable," said Noel. "We're going to make sure these things don't happen in the future."

The school's head master has laid out a six-point plan to address the issue. The conversation has taken off with students also joining the discussion from other Boston schools.